Woman sent to hospital after collapsing during fire at 313@Somerset 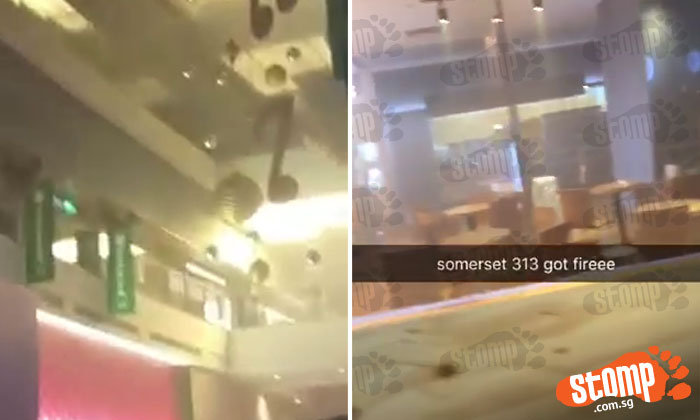 "We are pleased to update that 313@somerset will open at 1.30pm today, 16 December 2016, following the completion of the testing, clean up and rectification works due to a fire incident that closed the mall.  We are working closely with the authorities to investigate the cause of the incident. We are thankful of the support and patience of our retailers and shoppers and would like to apologise for the inconvenience caused."

Everyone should have heard the hot news by now  -- a fire broke out at 313@Somerset shopping mall along Orchard Road yesterday (Dec 15) night.

According to a report by The Straits Times, the Singapore Civil Defence Force was alerted to the fire at around 10.25pm. It was said to have involved contents of a store room inside a shop on the fourth floor.

The flames was reportedly put out using a single water jet, while the mall's sprinkler system was also activated, according to an SCDF spokesperson.

A woman was also conveyed to Singapore General Hospital after she tripped and fell.

Photos sent in by a Straits Times reader showed SCDF vehicles lined up along Orchard Road at the front of the mall, while another said there was a strong smell of smoke even from outside.

According to a shopper, the mall was in chaos when the fire alarm was activated. Security guards were "running here and there" shouting at people to leave the building.

People were dashing down the escalators, and this is when the woman in her 50s  collpased near an escalator outside the Forever21 store.

"She was semi-conscious, and the staff carried her away."

Stomper Sam was one the customers in Hai Di Lao enjoying a meal when the incident took place.

"I was enjoying my meal at Hai Di Lao when I suddenly the fire alarm following a loud bang.

"As a carefree person, I did not think much about it, but was evacuated by the staff around 10 minutes later.

"We quickly evacuated along with the rest of the restaurant and the staff at Hai Di Lao provided masks and direction.

"The whole mall was really smokey at the point.

"This was certainly a horrifying experience, and if my family and I were at the wrong place at the wrong time, we might have been hurt."