Woman says she can repay man she borrowed $184 from after 1 year -- but can do botox, go clubbing and visit Europe 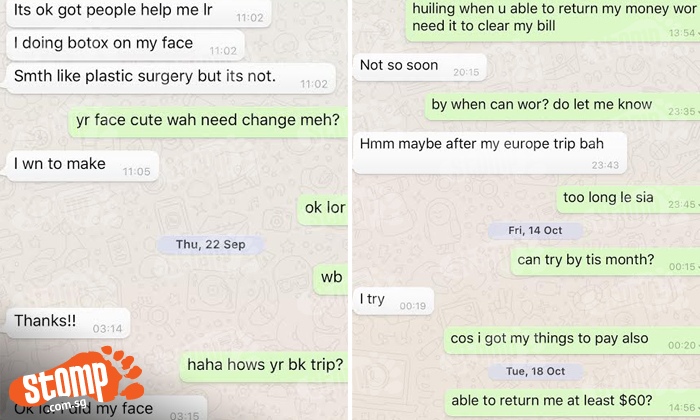 Stomper Po Heng said a woman who borrowed money from him asked if he could wait a year before she could return the amount.

The Stomper said he had initially loaned her $154.

She subsequently asked him for another $30 to repay another individual she supposedly owed money to.

In screenshots of chat conversations Po Heng had with the woman, she appears to chat frequently with him.

However, after he loaned her the money, she replied him less and less when he started asking if she was going to repay the amount.

In some of the chats, she told the Stomper that she was going for botox treatment and to dye her hair.

The Stomper also noticed that she was going to a club with her friends, despite telling him she did not have money to repay him.

In one of the chats, she asked the Stomper to wait for her trip to Europe to be over before she could repay him.

Po Heng said if that was the case he would have to wait for a year before getting his money back, which he refused.

The woman then stopped responding to his messages, even though she was allegedly reading them.

A friend of hers got involved in the issue at one point, but also did not respond properly when Po Heng asked if the woman was going to return his money.

Getting someone to pay you back the money they owe you can be tricky. Even if we are not the one who had borrowed the money, we tend to feel embarrassed having to ask for the money back.

Here are some tips:

1. Before you lend someone money, ask yourself if he or she is likely to pay you back. Do you know the person well enough? Does the person have a reputation for not returning borrowed money? Rememeber that you don't have to oblige.

2. Don't feel bad about asking for your money back. It is YOUR money. They should be the one feeling bad if they have not returned your money without any valid reason.

3. Offer gentle reminders. Sometimes, people just forget, not because they are deliberately trying not to pay you back.

4. Don't demand, just ask nicely. "Hey, do you remember the money you owe me? I actually need it now to pay for..." This way, the person won't feel too embarrassed.

5. Barter. If they can't pay you in cash, you might have to settle for a barter trade. Ask them if they are willing to settle the debt with something that they own.

6. If the person is clearly trying to avoid payment or is coming up too many excuses, be more direct. Tell them, "Hey, it has been a while. I need you to pay now". Use various means to remind them -- phonecalls, WhatsApp messages, emails, etc. Make them understand that you are serious about them paying back and that you don't intend to forget.

7. If you can't get them on the phone, make a visit to them in person. Show them that they can't simply avoid the situation and that they'll never stop hearing from you until they pay up.

8. Get help from another mutual friend, or if need be, from their relatives, to pressure them to pay up.

9. If the debt is a hefty amount, you might have to consider engaging the services of a debt collection agency. Bear in mind, though, that you have to pay the agency for its services.

10. If all else fails, and you know that you are never getting your money back, you probably have to just accept it and move on. Thinking about the money might do you more harm to your health.