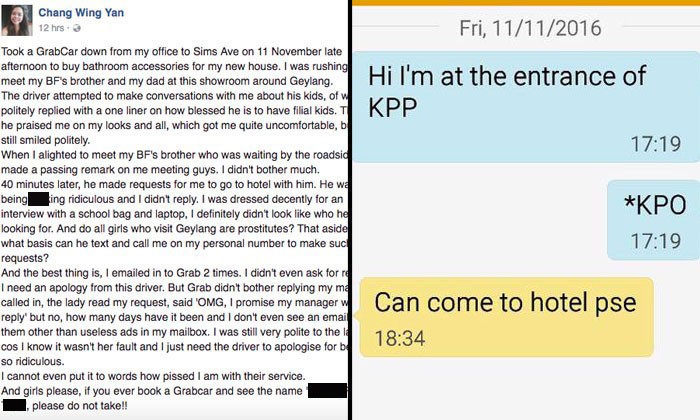 A woman was left incensed by an unpleasant experience she had after taking a GrabCar ride recently.

According to the passenger, Chang Wing Yan, she had boarded the ride at Sims Avenue on Nov 11 and was going to a showroom in Geylang.

In a post she made on Facebook, Chang alleged that the driver had made some remarks that made her uncomfortable, such as praising her looks and commenting about her meeeting guys.

Chang said that the driver then later sent her a text that said, "Can come to hotel, please?" which she ignored.

"I was dressed decently for an interview with a school bag and laptop, I definitely didn't look like who he was looking for. And do all girls who visit Geylang are prostitutes? That aside, on what basis can he text and call me on my personal number to make such requests?" wrote Chang.

The passenger added that her attempts to contact Grab about the incident have also proved to be futile.

This is apparently despite after two calls and an email from Chang, who also cautioned other females about the driver in her post.