Why so expensive? Woman pays $10.20 for a simple 'suan la fen' at Koufu in Toa Payoh Bus Interchange 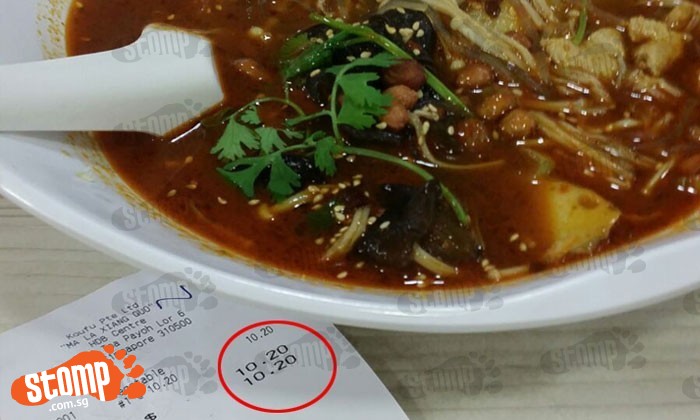 Stomper Khoo was eating 'suan la fen' for lunch today (Oct 28) which cost $10.20 and the Stomper thinks its ridiculous.

She was having lunch at around 11.30am in Koufu at the bus interchange in Toa Payoh and was shocked when she received the receipt for it.

The Stomper said, "How can a person who earns a normal wage afford a lunch that cost this much at a food court, especially since the standard of living in Singapore is very high?

"I can understand if I was eating at a restaurant or a cafe, but this is the basic food court that average workers would go to for lunch."

According to Mrs Khoo, the uncle told her that she added meat which cost $1 and then he mentioned how he needed to put the soup base ingredients in the dish.

However, the Stomper still feels that it does not justify anything.

Related Stories
$17.80? That's what one customer was charged for this economical rice meal at VivoCity food court
How much did you pay for your dinner last night? S'pore girl splashed out S$25,000 at US restaurant
Singapore's latest food fad? Milk tea in 'shampoo bottles'
food
expensive
Koufu
ridiculous