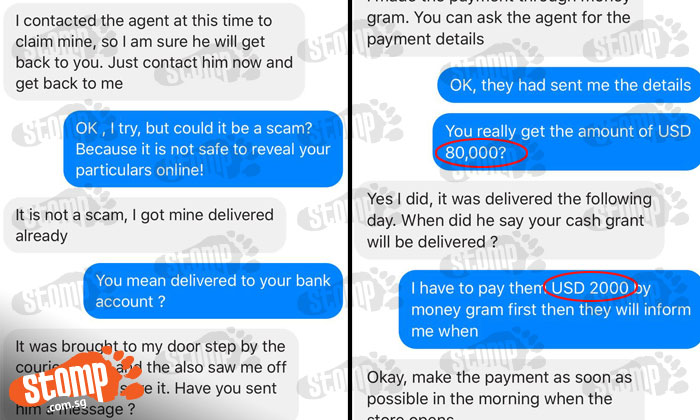 Heard of the saying "If something is too good to be true, it probably is," ?

Well then how would you react if someone told you that you are eligible to receive USD$80,000, if you paid USD$2,000?

Stomper's Cheryline's mum had received the following messages from one of her Facebook friends at around 4.05pm on Friday (Nov 4).

Cheryline's mum was in Las Vegas for a vacation when this incident took place.

Her Facebook friend had private messaged (PM) her, informing her that she was eligible for a 'home-care cash grant' from the US, where her name was listed to receive USD$80,000.

According to her friend, the "cash grant" had been donated to the listees by the humanitarian organisation to eradicate poverty and stabilise the economy.

Her friend had claimed that  she saw Cherlyine's mum's name on the list when the cash was "delivered to her doorstep by the courier agent".

Despite Cheryline's mum indicating that it might have been a mistake, her friend insisted that it was not a coincidence -- and that the money was donated to the US, Singapore citizens and all Commonwealth nations. She added that the listees were "chosen randomly" by the United Nations government and Treasury Department to provide financial assistance for both the employed and unemployed.

Her friend was so insistent to the point where she wanted Cheryline's mum to contact the "agent" immediately in the wee hours of the night, claiming that "it was not too late" and that they'd get back immeidately.

She even provided the Stomper's mother with a link to fill in her personal details.

"I have no idea what is going on, but this is one of her friends in real life.

"Despite knowing that she(mum) shouldn't be providing personal details randomly online, my mum actually clicked on the link and entered her details.

"I'm not sure if this message has been sent to other people, but I'm pretty sure this is probably a scam.

"I think her friend's Facebook may have been hacked by another user to do this. And may be other people have received this as well.

"If her friend was hacked, this is going to become a big problem because her name and picture were all used.

"But I definitely do not believe this. Where got such thing every Singaporean can get USD$80,000? If can I also want. Who wouldn't want?"

What do you guys think about this? Way too good to be true? We think so too.