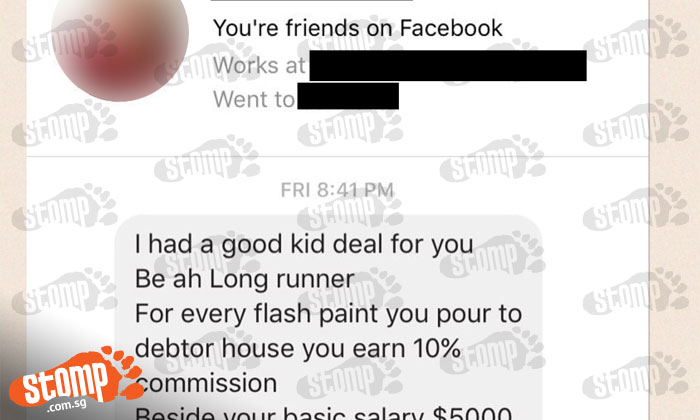 Stomper Liza's daughter had recently been contacted by one of her Facebook "friends" to become a loanshark runner.

According to the Stomper, the Facebook "friend" had contacted her daughter twice: first time a week ago, and recently a few days back.

In the first conversation, the "friend" provided details of the job -- a 10% commission for splashing paint on the debtor's house, and a basic monthly salary of SGD$5,000 a month.

"I'm really unsure how he got het contact because you need to accept friend requests on Facebook, and she doesn't remember adding this person.

"We suspect that maybe one of her Facebook friends is probably part of this now. This would explain why he could contact her.

"I'm also unsure of his identity. It might not be him in the photo, and he could be using someone else's name, and work place. So we're re really not sure if this person is real.

"Frankly speaking I thought this was funny at first, but of course this is still a serious issue. My girl is 20 years old so she is sensible enough to know not to reply.

"But I'm worried for the younger people who are more naive. They may not be sensible enough and may be caught in the act."