Woman enjoys snack she purchased, only to end up biting on screw 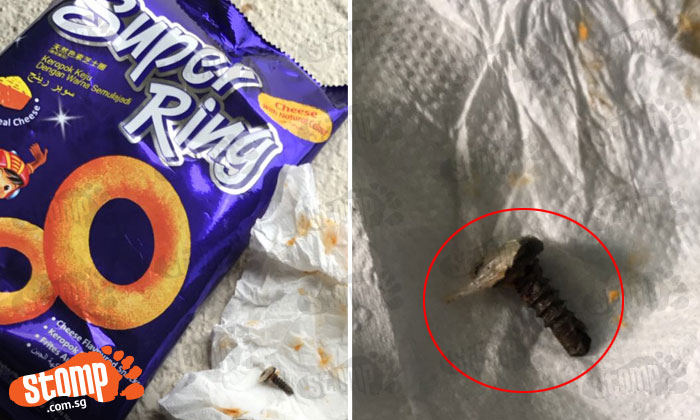 How would you feel if you found a screw stuck in between your favourite childhood while munching on them?

Belle purchased a pack of Super Rings along with other snacks like Kinder Joy from a value store sometime last weekend for herself and some relatives.

She was snacking on the pack of Super Rings halfway when she bit into something really hard.

If you look at the pictures closely, you'll notice something else in tack with the screw.

"I thought my tooth dropped out but to my horror, I found a screw stuck to one of the Super Rings after I spat it out.

"And it was inside the ring itself. Not in the packet, but in the ring!"

In hopes to have the company (Oriental Food Industries Sdn Bhd) look into the matter, Belle first contacted them via the company's contact form and even dropped them a Facebook (FB) message yesterday (Nov 9).

"Usually after sending contact forms, you'll receive a follow up email from the company immediately, but I received nothing so I decided to call them up right away," said Belle.

"While I was on the line, they transferred me to three different people and all of them were not able to help me.

"They didn't even seem alarmed by my complaint.

"The first two didn't quite understand what I was saying in English, so I spoke to the final staff in Mandarin, but all she said was that she'll let the company know. That's all.

"They didn't even bother to apologise."

Belle had previously decided to contact them via FB as they were very active on their page and had the Typically replies within an hour" sign at the side of the page.

She sent her messages at 1.37pm and they wee received and seen by Oriental Food Industries Sdn Bhd at 1.39pm on the same day, but they did not give her a reply.

"I'm disappointed that the company can't even reply promptly, and couldn't even do anything to help when I called their hotline.

"I'm also really shocked by what happened. This is a childhood snack that is enjoyed by all ages. And I just hope this does not happen in future as this is really dangerous.