Woman disappointed by quality of clothes she bought online: 'I can only fit in them if I am 9 months pregnant' 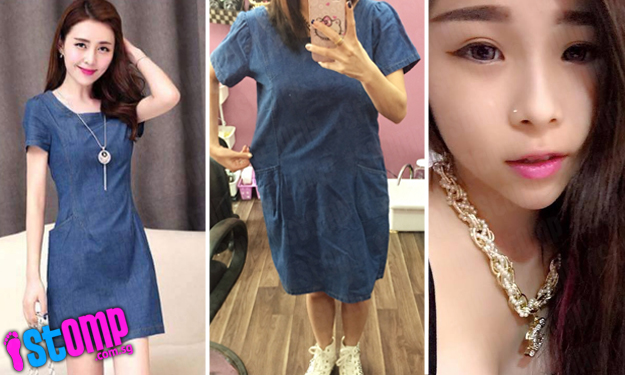 Stomper Miki bought some clothes that she was assured were of good quality from a woman online, only to be left sorely disappointed when her purchases arrived.

According to Miki, the clothes turned out to be way too big for her and more like Size XL even though she had ordered them in Size S. She also found the quality of the clothing's material to be unsatisfactory and 'sandpaper-like'.

"I was about to forget about this bad online buying experience and get on with my life, but I think I've got to say all these out to prevent people from going through the same thing.

"This seller sold poor quality clothes online. Not only are the clothes of poor quality, but the sizes that I had ordered were not the same when the items arrived.

"I ordered size 'S' but they came in 'XL'. However, the seller still insisted they were size 'S' which I think a nine months pregnant woman can also fit in.

"Before I made the order, she ensured me that the quality of the items were excellent. The pitch and tone of hers were also great.

"But when she delivered the items and I paid the money, everything changed 360 degrees.

"Before I could check the items, she rushed off to the bus stop like she was getting chased by a dog till the extent that she left her EZ-Link card at my place.

"Thus, I used the time to check the items and found out that they were too big and not the size I wanted. No way the clothes looked like 'S' sizes and their quality was bad to almost the same extent as sandpaper.

"When she came back to get her EZ-Link card, I did question her about all the problems. But she just replied not to worry, that it was top quality and to try to wear. Then she ran off again.

"After trying all the items around 30 minutes later, I confirmed that I could only wear the clothing if I am nine months pregnant.

"I gave her a call to come back to get back the items. And instead of the $50 I had paid to her, I would only want to get back $30. The $20 would be transport fees for her out of my kindness. She agreed."

Miki said that despite agreeing to the partial refund, the seller kept saying that she was busy and did not return the money. She apparently also told Miki to wear a belt with the oversized clothes instead.

The seller allegedly stopped responding to Miki after awhile.

"$50 is a small amount which I would not even mind paying for the lousy clothes. But it is the irresponsibility she displayed as an online seller that angered me."