Woman dies after husband drives into her at AMK: New video shows what happened moments after the crash 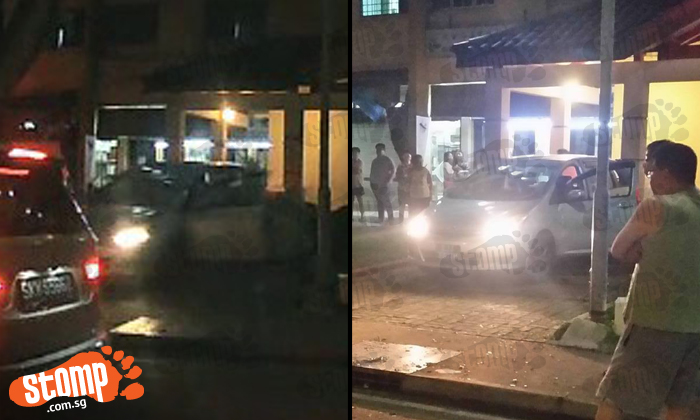 Stompers Mavis, Edwin, Maria and KD Rooban alerted Stomp to a fatal accident that occurred at around 7.50pm last night (Apr 25) at the carpark of Block 332 Ang Mo Kio Avenue 1, involving a husband who allegedly drove his car into his wife by accident.

The 64-year-old woman was unconscious when conveyed to Tan Tock Seng Hospital where she subsequently succumbed to her injuries, a police spokesperson told Stomp.

A spokesperson from the Singapore Civil Defence Force added that they were alerted to the accident at around 7.50pm, and dispatched an ambulance to the location.

In the video sent in by Maria, the driver can be seen reversing into the pillars at a nearby Housing Board block after hitting his wife.The accident also toppled over two parked motorcycles.

Stomper KD Rooban had just dropped off a passenger at the carpark when he witnessed the aftermath of the accident.

The Stomper said he saw the injured woman stagger to the middle of the road before she collapsed.

"Blood was oozing out of her ears and she was lying motionless on the ground.

"The car's hazard lights were blinking and the front passenger side door was open.

"Later I saw her husband, a man in his sixties wearing a blue T-shirt, switch off the vehicle's engine.

"I immediately called the police. Some passersby performed cardiopulmonary resuscitation (CPR) for quite some time until the ambulance arrived. The paramedics then took over performing CPR until around 8.15pm.

"Her husband was standing beside her when they were performing CPR. He was in a state of shock and was trying to call someone.

An onlooker also told The Straits Times that the husband kept repeating in Mandarin, "She's my wife, why did I hit her?"

Check out the videos sent in by Maria and Mavis.