Woman dies after being found injured at foot of Geylang block, man succumbs to injuries after falling from same building: Police 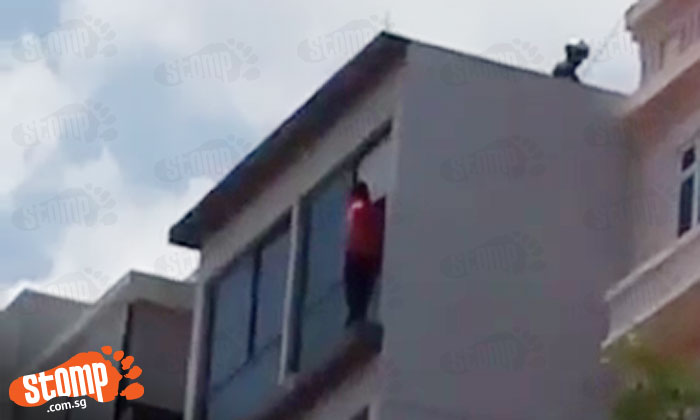 A 43-year-old man and 31-year-old woman succumbed to their injuries after the woman was found injured at the ground floor of 39 Geylang Lorong 32 and the man fell from the eighth storey of the same building today (Apr 30).

Stomper Justina shared with Stomp videos taken at the scene by her friend showing the man standing on a ledge outside the window.

Police and Singapore Civil Defence Force (SCDF) officers were at the scene.

In response to Stomp queries, a police spokesperson said:

"A 31-year-old female was found injured at the ground floor of the location.

"Subsequently, a 43-year-old man was reported to be standing at the parapet of the eighth floor of the same building.

"He later jumped off while a rescue effort was being affected.

"Both subjects succumbed to their injuries.

"The police are investigating their unnatural deaths."

Related Stories
Horrifying footage shows man 'sliced in half' as train runs over him -- and then he miraculously gets up and walks away
Hong Kong model live streams suicide attempt on Facebook: "I hate myself"
18-year-old student attempts suicide in Hong Kong after getting raped by Tinder date
suicide
police
scdf
height
Geylang
death
Geylang double deaths