Woman claims ex-BF beat her and slashed her with knife during argument, posts photos of injuries on Facebook 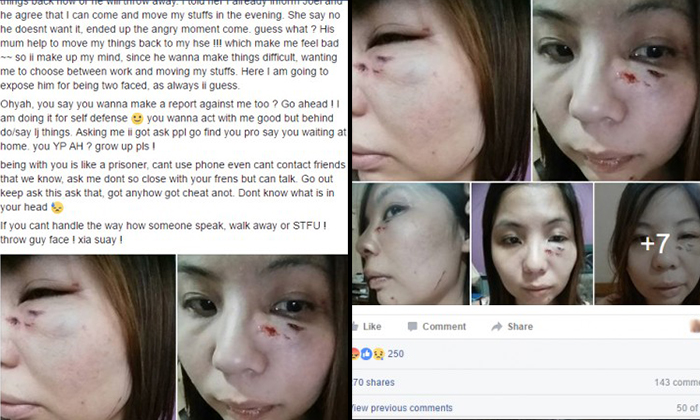 A woman took to Facebook with a lengthy post to rant about how her boyfriend had allegedly abused her during an argument between them.

Stomper Discreet, Zefu and Stephen alerted Stomp to the post, along with photos of the woman's injuries.

The woman, named Patricia Wan, said that she had showed up 20 minutes late to meet him at his house because she had been looking for her dad with her sister.

Though he was unhappy that she was late, she brushed of his questions and went to bed.

However, he allegedly pulled her out of bed and punched her in the face, and she pushed him away and punched him back.

This made him punch her face a few more times before banging her head on the wall and pressing his leg on her tummy.

When she pulled his hair and kicked him, he went to look for a knife.

Upon finding one, he pressed it against her face and allegedly slashed her with it, prompting his mother to stop the fight.

Though Patricia said she picked up a Martell bottle to throw at him, she decided not to.

She claims that his mother said that she was the third girl to be abused this way.

Patricia also said that after being told that she would be lodging a police report against him, he started messaging her nicely.

But he then decided to throw all her things out, so his mother brought them all to where Patricia was staying.

Though Patricia said she felt bad and sorry for his mother and his daughter, she wanted to lodge a report and make a Facebook post on his abuse as self defense.

Photos she uploaded along with her post show various injuries.