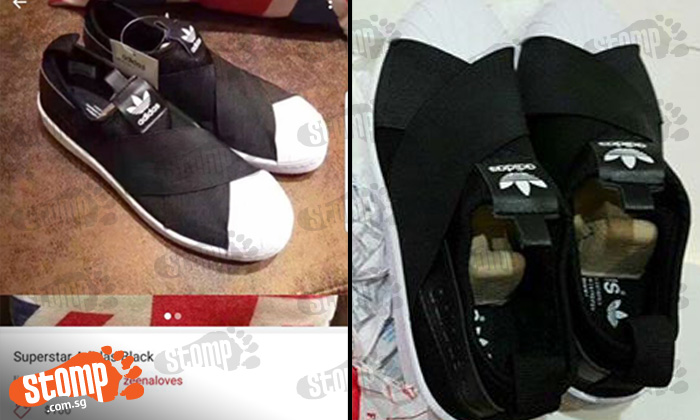 A woman purchased a pair of Adidas Originals Superstar Slip On shoes claimed to be ' authentic' by the seller, but they turned out to be fake.

Stomper Selina shared with the Stomp team about the $100 purchase she made in October.

According to the seller, 'Zeenaloves' on Carousell, the shoes are a locally purchased gift.

"(The shoes are) Authentic! If inspired, I think the price will be cheaper," said the seller.

The seller added, "They (the shoes) were given to me as a gift, but I don't like the colour black. I was told that these shoes were bought locally, and are authentic."

The seller, a Chinese-Indonesian, then told Selina that she would be leaving for Indonesia and delayed the order.

Afraid that she would get scammed, the Stomper requested for more pictures of the shoes.

The seller sent pictures of Adidas signature blue shoe box and the pair of shoes with a price tag on.

However, weeks later, the product arrived in a plastic bag instead of the shoe box.

"While waiting for the shoes to arrive, I ordered the exact same shoe model from Limited Edt at $99. Thus, I compared both pairs of shoes, and it is very obvious that the shoes I bought from this seller are fake."

"I then asked for a refund, if not I would report this scam to the police. The seller still insisted that the shoes are authentic, denied to refund, and urged me to make a police report."

Selina reported the seller on Carousell and lodged a police report.

The police told Selina that this is a case of breach of contract.

"The police said there is nothing much they can do," said Selina.

Selina hopes to share this to encourage online buyers to be more aware of unethical and dishonest sellers.