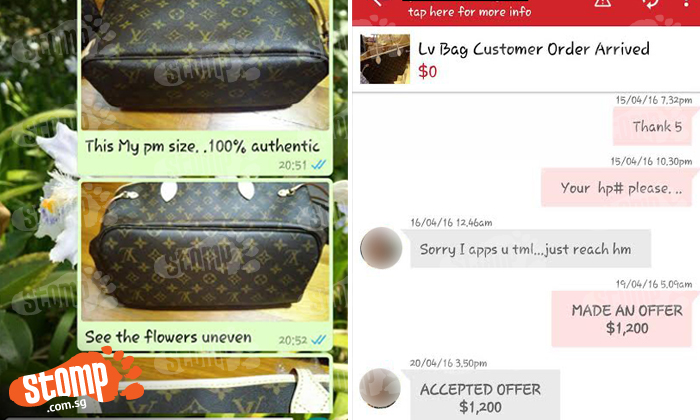 A woman purchased a Louis Vuitton bag claimed to be '100% authentic' by the seller, but it turned out to be fake.

Stomper Anonymous shared with us about the $1,200 purchase she made a few months ago in April.

According to her, the Carousell seller had said that it would be a '100% refund' if it was not authentic -- but she has not yet received a refund.

The seller had told the Stomper that the order would arrive in about 2 to 3 weeks. However, weeks passed and she did not receive anything.

She then chased her about it, and finally after one and a half months she received her LV bag.

The Stomper said, "I was in a hurry and did not check very thoroughly."

When she went home, she realised that it was not as authentic as claimed.

After allegedly verifying it at a boutique store, the Stomper found out that it was as she suspected -- a 100% fake.

She confronted the seller, who then blamed it on the supplier telling her that it was authentic as well.

The latter agreed to provide a refund. They agreed that it could be refunded to her in 'installments', as the seller lameted that cash was tight for her.

They arranged for a meeting time and place -- but the seller did not turn up.

The Stomper has since made a police report.