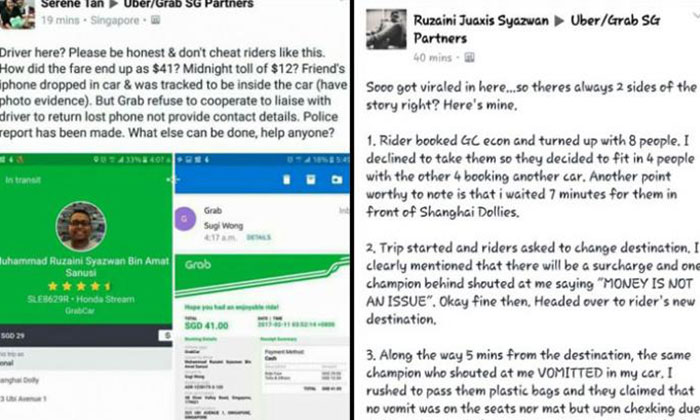 Stomper Serene wishes to apologise to GrabCar driver, Ruzaini, for an earlier misunderstanding and clarifies what actually happened.

She had accused Ruzaini of inflating the fare and keeping her friend’s phone which was left in Ruzaini’s vehicle on the Uber/Grab SG Partners Facebook page, but later received a call from police saying that it was a mistake.

According to Serene, her friend was handed the wrong contact details by the Grab office.

When her friend tried calling the driver to ask to retrieve the lost phone, the driver on the other end naturally denied the entire incident, prompting her friend to lodge a police report.

Meanwhile, Ruzaini only found the phone as he was cleaning up his car the following day, which he returned to a police station as the Grab office was closed.

In light of the misunderstanding, Serene said that they have withdrew the Police report and the lost phone has since been retrieved from the Queenstown Police Centre.

“Our sincere apologies for causing the driver distress.

“The $41 fare was accepted after the passengers admitted to having dirtied the car and were also dropped off at several different destinations.

“My friend also admitted to having agreed to the additional surcharge.”