Woman allegedly runs over dog at Pasir Ris Farmway 3, then says "f*** you, it's only a dog" to owner and drives off 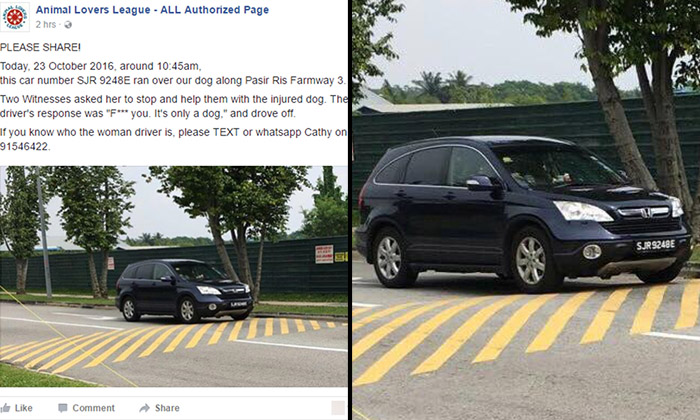 Two Facebook posts about an errant driver who answered rudely after allegedly running over a dog at Pasir Ris Farmway 3 at 10.45am today (Oct 23) has sparked an uproar among Singapore netizens.

Many Stompers emailed and messaged Stomp on WhatsApp to alert us to the posts on the incident, which have quickly gone viral.

The two posts, one made by Lixin Tan, and the other by Animal Lovers League, detailed the incident which happened near an animal shelter.

The woman, who was driving a Honda with the licence plate number SJR 9248 E, allegedly ran over the dog.

An update posted by Lixin Tan stated that the wheel rolled over the dog and it was hit several times by the mud guard as the driver did not stop while the animal was sturggling under the car.

She was stopped by two witnesses who asked her to help them with the injured dog.

However, according to the two Facebook posts, the woman allegedly told them ,"F*** you. It's just a dog," before driving off.

The dog reportedly got frightened and ran away, until a volunteer the animal trusts chased it and managed to bring it back to the shelter.

Cathy Strong, one of the founders of the Animal Lovers League shelter, told Stomp that dog, named Sayang, is currently at a clinic.

She added that a report will be filed with AVA over the incident tomorrow.

Related Stories
Do you know this uncle? SPCA is looking for him in relation to alleged monkey abuse at Woodlands Waterfront Park
Who's the sicko who used scotch tape on bird in Potong Pasir?
Pet grooming school owner who abandoned 18 dogs jailed and fined $65,700
driver runs over dog
animal abuse
dog
accident
road bully
injured