Why you high beam me? I just wanted to reverse to the correct lane! 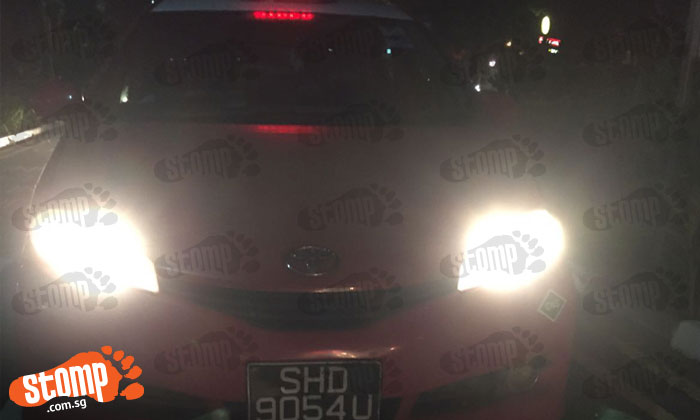 Inconsiderate and selfish drivers… how would you handle someone like this?

Stomper Jeffrey was on his way to Alexandra Hospital at around 7.40pm yesterday (Oct 30) when his vision was hindered by the dark skies and rainy weather, causing him to drive into the ambulance-only lane by accident.

The barrier failed to lift up for his car to drive through, and he was left with no choice but to reverse his car in order to enter via the correct lane right next to it.

However, Jeffrey had to wait for the Trans cab behind his car to give him way in order to reverse out of the lane. He then engaged his car into reverse gear and patiently waited for the cab to reverse a little.

“Soon after, he (taxi driver) started to high beam at me. It was too glaring and it blinded my vision. I then alighted from my car and walked towards him, asking if it was necessary for him to high beam. He replied in a rude manner, arguing that l was blocking the way by driving into the wrong lane, and that I was wasting his time.

“His unreasonable response landed us in a short nasty argument, and as I didn’t want to let the matter escalate any further, I returned to my car shortly after.

“As soon as l entered my car, he started to high beam at me again. But this time round, he refused to reverse. Immediately, I alighted from my car and take pic of his cab.

“I think it’s a pain to have such ill mannered taxi drivers on our road especially when he is in the service line. I am outright disgusted with his lousy service attitude and behavior from one of our local taxi company.”

Stomper Jeffrey had since called the Trans cab company immediately to lodge a complaint, but he was told that they were closed for the day.

Geez, this taxi driver is really too much.

Related Stories
Woman argues with cabby for taking wrong turn then returns with fiance who repeatedly punches him in the face
Police called in after 'professor' gives cabby $1 tip -- then tells him to 'step out and show respect'
"I'm going to kill him": Female passenger gets into fight with cabby after refusing to pay $6 fare
inconsiderate
driver
taxi
cabby
argument
angry