Where to start about this disappointing $85 cake -- that ruined 8-year-old boy's birthday? 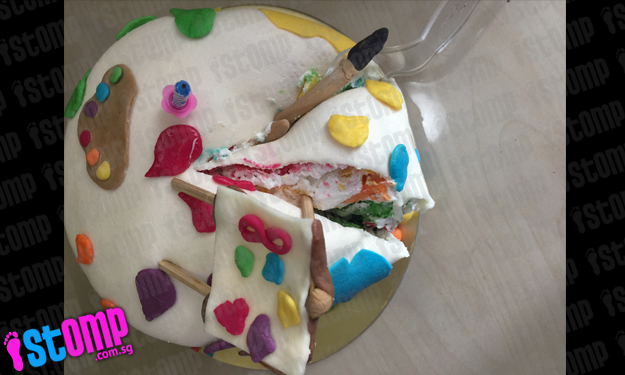 First of all, her son's name was pasted on the cake plate in paper instead of it being on the cake and made out of fondant.

However, Elyz said that, together with the unsatisfactory decoration of the cake on its exterior, were merely small issues compared to everything else.

A video contributed by the Stomper shows someone trying to cut the cake with great difficulty. As she did so, the decoration on top of the cake also started toppling.

The taste of the cake itself was just as disappointing, if not more. According to Elyz, guests could taste the sugar grains used to make the cake.

To make matters worse, the person she had ordered the cake from did not offer an apology and instead, made a snarky remark when Elyz conveyed her feedback.

The Stomper, who paid $85 for the cake and another $35 for delivery charges, shared with Stomp what she told the cake seller:

"The party is over and done with and here I am, writing with regards to the cake which you supplied us for my son's eight birthday celebration.

"First and foremost, I am dissatisfied with the way my son's name was placed on the plate on the cake. Am I supposed to paste the plate which has my son's name on it on the wall for it to be remembered?

"On top of that, the wordings weren't fondant. So is this the kind of service you give to your other customers as well? I hope not. If you are then you should be ashamed because your 'masterpiece' is so bad that all of us shared a laugh together.

"However, I haven't even gotten to how disgusted I felt after attempting to cut your $85 cake. To my horror, the inside of the cake was utterly disappointing.

"For a moment, I thought that the inside of the cake would be enough to cover up for the lack of creativity in decorating my son's cake. I thought wrong. The worst part happened when I couldn't even cut a slice off.

"The kids were very excited for the cake until they saw how unappetising it looked. The slice that I tried to cut broke down into crumbs just like my hopes for the cake.

"So if you are wondering if the cake actually tasted good, then keep on wondering because my son (birthday boy) took a bite and his words were, 'Ma, I don't want it.'

"Obviously I gave up on the cake and apparently I paid $85 to put a cake in the trash.

"To the one who made this cake, you ruined everything. To the seller, when I texted you, your reply was extremely absurd: 'First time dapat customer macam you'. Translation: 'First time getting a customer like you'.

"That was the reply I got when I questioned her. Ridiculous right? And she thought she could just refund me. It's not about the money.

"My family and I are embarrassed. Also, I am the host of this party. Refunding isn't a way of apologising. It doesn't resolve anything either."

Elyz said she was offered a refund of $85 for the cake but not the $35 delivery charges.