What would you do if you see a 'saman aunty' getting threatened in public? 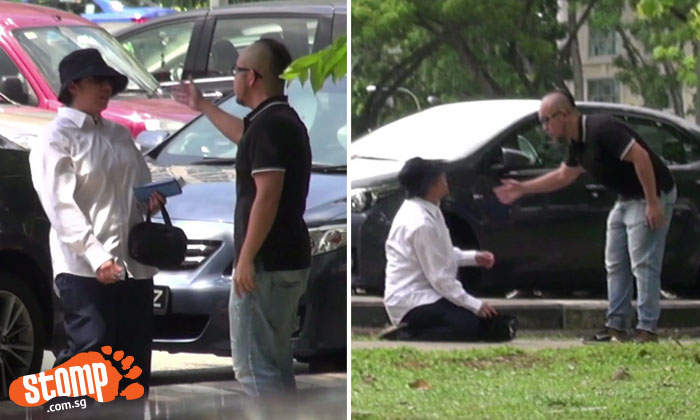 The parking aunty. Someone both feared and hated by drivers in Singapore.

However, if one such parking attendant was ever threatened, would you step in to help?

In a social experiment conducted by the Stomp team, we set out to find those who are bold enough to defend someone being bullied for doing their job.

Stomp's Social X feature aims to see how people react to a variety of unusual situations, and just what it will take to get them to intervene.

We got an angry driver who had just received a parking summons to yell at the 'parking aunty' who issued it.

We staged this scene at public carparks at Ang Mo Kio Central and Bugis MRT Station, and immediately noticed a few traits that were common among most people.

Some would stop to see what the commotion was about, while others would continue gazing from afar.

Some would even stand and record the incident for up to 30 minutes without intervening.

And then there were those would ignore the commotion, or start walking in a different direction.

So, we had to take it up a few notches.

From getting our 'driver' to shove the 'parking aunty' to getting her to pretend to fall down on the ground, we pulled out all the stops.

However, people still gawked from a distance or walked past them.

One even walked in between them.

In our final bid to find a bold soul, we told our 'driver' to further up the ante by shoving the 'parking aunty' and kicking her things, while she was on the ground.

Finally, after a long wait, a courageous individual stepped forth to stop the 'angry driver'.

After seeing him confronting our 'driver', two other men came over to join the fray.

In a few tense moments, you can hear and see the two men threatening our 'driver'.

However, the man who first intervened told them to calm down, and that he would talk things through with the parties involved.

Our social experiment shows that most people would avoid intervening in such situations.

But there are a few among us who are bold enough to stand up for those who need help.

And it is these stand-out characters who help to restore our faith in humanity.

Now, what would you do if you were faced with a similar situation?