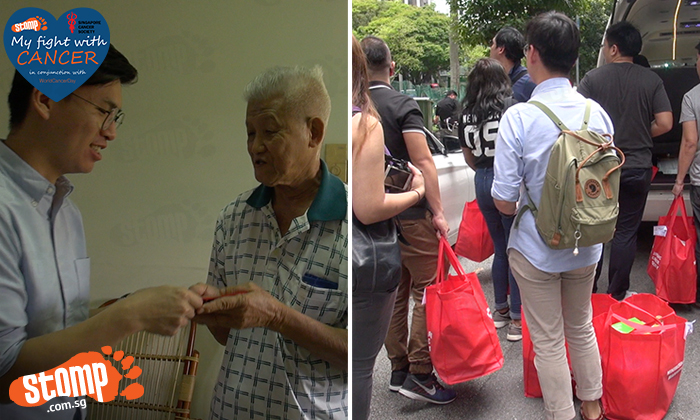 The festive giveaway, a collaboration between Stomp and Singapore Cancer Society (SCS), aims to spread cheer among SCS beneficiaries during the Lunar New year period.

The Stomp Team had volunteered to deliver the gifts to the beneficiaries as part of our campaign to raise awareness of cancer to mark World Cancer Day on Feb 4.

On Wednesday, we divided ourselves into two groups of nine -- one group making the deliveries in the morning, before the other group took over in the afternoon.

Both groups collected 20 hampers and ang paos from the SCS office in Tanjong Pagar before heading out to the homes of the beneficiaries.

Each 8kg hamper was filled with household items like rice, oil, Milo, cereal and condiments, while each ang pao contained NTUC vouchers worth $200.

The Stomp Team delivered the gifts to the homes of SCS beneficiaries in the West, North and East side of Singapore.

Before leaving each home, we chatted with the beneficiaries and immediate family members (some of the beneficiaries were not at home) to find out how their living conditions were, as well as what other forms of aid they would like to receive.

Through our interactions with them, we got a better understanding about the difficulties that the beneficiaries faced as well as how they were held back in life due to cancer.

In one of the houses we visited, the beneficiary was diagnosed with bladder cancer, and had to undergo an operation to remove the embedded tumour.

After the operation, he had to attach a urostomy pouch, which held his urine, externally to his abdomen.

Despite that, the cheerful individual comically poked fun at his situation, complaining about how he was no longer able to sleep on his sides without rupturing the pouch.

One beneficiary told us that her while her son had passed from cancer while her husband was currently receiving treatment for it.

Her daughter-in-law was also in jail.

Here finances, which were already tight, was about to get tighter.

Not only did she have to juggle between work and sending her husband for chemotherapy sessions, she would also have to care for her grandchildren who were coming to live with her soon.

The volunteer experience was an eye-opener for the Stomp Team.

For many of us, this was our first time doing volunteer work.

We got to see first-hand the hardship that low income cancer patients have to endure in Singapore.

Crammed and cluttered houses, having to juggle cancer treatment and making ends meet, as well as living extremely frugal lifestyles due to financial constraints were difficulties that many beneficiaries go through.

Despite their ordeals, they greeted us with a smile on their faces when we visited their homes.

Not once did their expressions and that of their loved ones reveal the many battles they had fought.

We were also struck by a sense of helplessness, about not being able to do much to ease their pain.

Related Stories
My Fight With Cancer: "No one can tell me I'm ugly... I know I'm beautiful"
Stomp intern tries 'best prata' Stomper has ever had in his life
Are you fighting cancer or have fought cancer in the past? We want to hear your experiences
cancer
inspiring
Stomp's World Cancer Day campaign
heartwarming