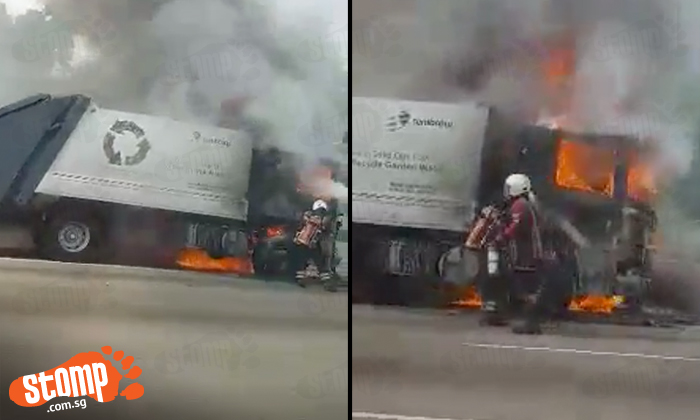 Stomper Jaz and Stomper Hong Yap came across a SembCorp garbage truck that was on fire when driving along the Bukit Timah Expressway (BKE), on Mandai Road and heading towards Woodlands at about 12pm today (Dec 19).

They submitted videos of the incident to Stomp.

From the videos, the truck can be seen on fire and emitting billows of thick, black smoke, while firefighters attempt to put out the raging flames.

"SCDF was alerted to an incident on BKE, towards Woodlands, near Mandai Road at 12.15pm.

"The fire was extinguished by the SCDF using one water jet.

"The cause of the fire is under investigation.”

"We can confirm that at approximately 12.15pm this afternoon, there was an incident involving a fire on an off-duty SembWaste vehicle.

"As the vehicle was travelling along the BKE to the company’s depot, our employee who was behind the wheel detected smoke and immediately pulled the vehicle onto the road shoulder and safely evacuated the vehicle.

"The Singapore Civil Defence Force (SCDF) and Traffic Police (TP) were alerted to the situation, and the fire was extinguished by the SCDF.

"No one was injured.

"At SembWaste, safety is our top priority. We are currently conducting a thorough investigation into this and will fully cooperate with the authorities to establish the root cause of this incident."