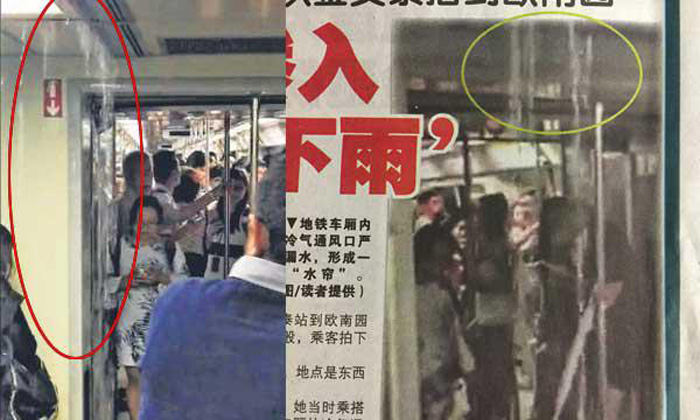 Commuters on a train on the East West Line, travelling from Clementi to Outram Park stations, ended up getting an unexpected shower when water fell through a ventilation gap in the ceiling.

According to the Shin Min Daily News, the incident occurred on July 18 at about 6.20pm.

Photos captured by eyewitnesses showed water pouring down from the roof of the train. One female commuter told the Chinese evening daily that she noticed the air-conditioning vent was leaking when she boarded the train at Clementi.

Soon after, water started pouring into the carriage from the gap, pooling at commuters' feet.

Passengers quickly got out of the way of the cascading "waterfall". Quite a few were snapping photos of the sight with their mobile phones, she said.

She said a man standing below the leak was too engrossed with his mobile phone to notice at first, but jumped out of the way after he felt his shirt getting wet.

According to Mr Patrick Nathan, SMRT's Vice President for Corporate Information and Communications, its Operations Control Centre was alerted to a leak in the air conditioning system in a train travelling towards Pasir Ris on Monday.

"Our staff boarded the train at Commonwealth Station to check the leak, and a cleaner was quickly sent to clear up the water.

"The train was subsequently withdrawn from service. We apologise to affected commuters."

Similar incidents had occured on the North East Line last July and on the East West Line in August 2014, the latter after a heavy downpour.