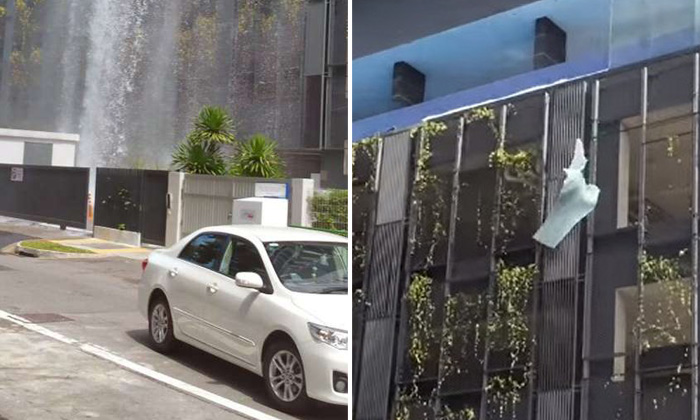 Glass panels from a condominium swimming pool off Balestier Road crashed from the fifth floor to the ground on Friday (July 8) afternoon.

Ms Shuli Sudderudin, 31, who lives in the condominium beside Cradels @ Whampoa, said she first heard a loud crash like a "big metal thing falling" while she was at home.

She left her home half an hour later, and was walking past the condominium when she heard the sound of "a small waterfall".

She looked up and realised that water was pouring from the swimming pool at Cradels @ Whampoa down the building. Then, she saw another glass panel tumble from above.

A photo taken by Ms Shuli showed a glass panel dangling in mid air. A number of other panels appeared to be missing.

She was outside the fence of the condominium but still alarmed, she said.

"Water sprayed everywhere over the road in front. It was quite dramatic. I was standing there and people came rushing out and yelling and telling me not to stand there as another glass panel shattered," she said.

The Singapore Civil Defence Force said it was alerted to the incident at 2.32pm. No injuries were reported.

A Building Construction Authority (BCA) spokesman told ST: "Upon arriving at the site, BCA engineers found that a row of glass panels, that act as a safety barrier for a stretch of maintenance ledge on the outer edge of the swimming pool, had fallen off from the fifth floor.  The glass does not contain the water in the swimming pool.

"In the interest of public safety, BCA has directed the owner of the building to close the entire fifth storey and the affected area below the fallen glass panels.  The owner will be required to appoint a Professional Engineer to advise on the necessary precautionary measures to remove any danger, carry out a detailed investigation  assess the structural condition and recommend permanent rectification works.

"Under BCA’s building regulations, glass that is used as a safety barrier must be laminated glass and designed to withstand horizontal loading determined in accordance with prescribed standards. For infinity edge pools, the industry is required to incorporate reasonable safety measures in the infinity pool design to mitigate the risk of falling from height."