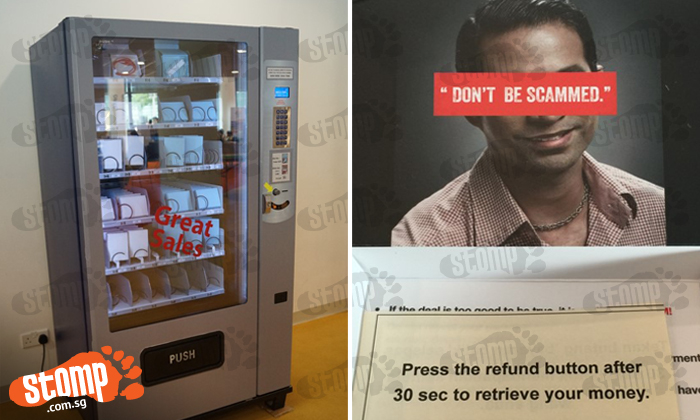 Stomper Goh had an unusual experience after finding herself falling victim to a 'scam' set up by the Police at the Sports Hub Library.

The so-called scam was actually part of an initiative by the Singapore Police Force to educate the public about the many frauds happening recently.

The Stomper described what happened:

Was at the Sports Hub Library today and noticed one vending machine selling powerbanks and charging cables at just $1. It seemed like a cheap deal and I decided to purchase the charging cable.

"However, when I retrieved the box, it felt extremely light as if the box was empty. True enough, when I opened the box, it contained nothing but an anti-scam message and also a note to alert me to retrieve my money.

"Shortly, a man approached me and identified himself as a police officer.

"He explained that the vending machine was part of their anti-scam initiative to create anti-scam awareness.

"He also highlighted that deals which seem too good to be true are often scams which many Singaporean have fallen prey into.

"One way to identify scams is to be a victim of the scam in the first place.

"Kudos to our man in blue for coming up with such unique and innovative way to educate members of the public.

"Remember, if the deal is too good to be true, it's probably a scam!