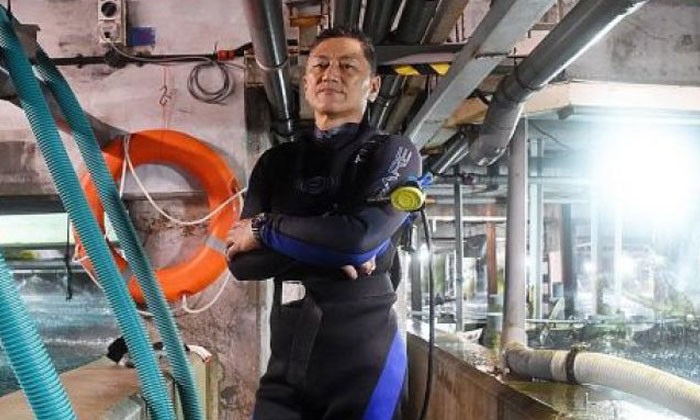 The Ministry of Manpower (MOM) has issued a stop work order to Underwater World Singapore following the incident.

A statement from MOM read: "The Ministry of Manpower was informed about an incident that took place at Underwater World Singapore Pte Ltd’s premises at Siloso Road on 4 October 2016.

"Officers from MOM’s Occupational Safety and Health Inspectorate responded to the scene immediately and commenced investigations.Preliminary findings indicate that a worker was pierced in his chest by the barb of a stingray while he was in the midst of transferring the stingray from its tank. He was conveyed to hospital where he subsequently succumbed to this injuries.

"MOM has instructed the occupier to stop all activities associated with the transferring of sea animals. Investigations are ongoing."

An earlier statement from Haw Par said that it had suspended its animal transfer programme at UWS.

In what is believed to be the first such incident in Singapore, a man died after he was stung by a stingray yesterday afternoon.

The victim is Mr Philip Chan, the head of the team of divers at Underwater World Singapore (UWS), which has been closed since June.

Tributes to Mr Chan, who was also the senior supervisor of UWS' curatorial department, began appearing on Facebook last evening.

The New Paper understands that the once-popular attraction on Sentosa island was in the process of moving its marine animals at the time, and Mr Chan, who was in his early 60s, was working with stingrays when tragedy struck.

The police said they were alerted at 2.20pm to a case about an injured man at UWS.

A spokesman said he was taken to the Singapore General Hospital (SGH), where he died of his injuries.

They are investigating the unnatural death.

The Singapore Civil Defence Force said it dispatched an ambulance to the scene. The victim was unconscious when he was taken to SGH, its spokesman said.

TNP and The Straits Times (ST) carried profiles of Mr Chan, an avid diver who had been with UWS since it opened in 1991, in June after the closure of the marine park was announced.

It was obvious from the interviews how devoted he was to the marine animals he had worked with for 25 years.

"They are so quietly tame," he told TNP, adding that he was sad to say goodbye to his "band of friends".

"We intend to find them the best homes and environment. The next time I see them, I might not recognise them any more but if I dive, they might recognise me."

Mr Chan would usually be in scuba gear in the water to place food in the mouths of the stingrays and sharks during feeding time while visitors watched and took pictures.

"I treat (the animals) like my babies," he told ST.

While describing the eagle rays and the nurse sharks as "gentle", he told ST that he had been bitten a few times by sharks which mistook him for a fish, but they let go once they realised he was not food.

"Whenever I get in danger, I just keep calm. I can overcome any danger by just being calm," he said.

Tragically, Mr Chan would lose his life to one of his "babies" that he had cherished for so long.

When contacted, Dr Tan Heok Hui, 45, an ichthyologist, told TNP that stingrays that have been in captivity can feel provoked and try to retaliate by stinging when they face stressful situations such as being moved from their tanks.

Dr Tan, an operations officer at the Lee Kong Chian Natural History Museum, added: "Stingrays attack when they feel threatened, cornered or alarmed. Sometimes, a stingray might feel threatened when someone accidentally steps on it.

"Stingrays have backward pointing barbs on the spine that have serrated edges. They don't just cause physical pain, the toxins in the spine can also cause extreme discomfort. When a spine pierces human flesh, it breaks and releases toxins into the flesh."

The toxins commonly found in stingray venom are protein-based enzymes like serotonin, which is known to cause severe muscle contractions.

Whether a sting is fatal or not depends on where the victim is stung, said Dr Tan.

"If a victim is hit in vital organs like the chest area, it may trigger a cardiac arrest, which could subsequently be fatal," he added.

The best known case of a stingray killing a human was Australian TV personality Steve Irwin, who was stung in the heart while swimming near a stingray in 2006.

There are more than a dozen species of stingrays in Singapore waters. They include the blue-spotted stingray, whiptail stingray and Gerrard's stingray that can commonly be found in murky waters.

It is not known which species was involved in the attack at UWS.

Dr Tan said: "Stingrays are not usually aggressive, and choose defensive methods to protect themselves. However, stingrays are still wild animals, and when provoked and left with no choice, they will defend themselves using their sting."

UWS, which was owned by Haw Par Corporation, closed its doors on June 27. When it opened in May 1991, it was the largest tropical fish oceanarium in Asia.

Built at a cost of more than $20 million, it was best known for its 83m-long underwater tunnel, where visitors could view fishes swimming above their heads and around them.

The closure did not come as a total surprise to industry experts who pointed out that the attraction had faced keen competition from the newer S.E.A. Aquarium and Universal Studios Singapore theme park, which are also located in Sentosa.

UWS' lease for the premises was due to expire in less than two years, and it decided to close early to facilitate the transfer of its marine creatures, said a UWS spokesman in June.

The park was deserted when TNP went there yesterday evening.

Three staff members were seen walking out but when approached, they declined to comment on the incident.

A worker at the nearby Shangri-La's Rasa Sentosa Resort & Spa said he saw an ambulance at Underwater World yesterday afternoon.

The middle-aged man, who requested anonymity, was surprised to find out what had happened.

He said: "It all happened very quickly. The ambulance came and quickly left the premises. I've never seen such an incident happening here before."

Haw Par did not respond to TNP's queries by press time.

Haw Par released a media statement on Wednesday (Oct 5) saying Mr Chan "was injured in the chest by a stingray while preparing the animals for transfer to their new home in another aquarium".

"He died from his injury a few hours later at the Singapore General Hospital."

Mr Chan was one of 10 staff members who had stayed on after Underwater World Singapore ceased operations to care for the animals while suitable homes were being found for them, it said.

The animal transfer programme has since been suspended.

"Haw Par is providing all possible support and assistance to Mr Chan’s family in this time of difficulty."

Popular Australian TV personality Steve Irwin must be the most famous person to be killed by a stingray.

Irwin, 44, died in a freak accident while he was swimming near a stingray in shallow water in Australia on Sept 4, 2006.

Also known as the Crocodile Hunter, Irwin was stung in the heart by the stingray's barbed tail, which whips up in a reflex action when it feels threatened.

It was the third recorded fatal stingray attack in Australia.

News agencies reported that Irwin had been snorkelling in about 2m-deep water for a documentary titled Ocean's Deadliest at Batt Reef, near Port Douglas, in north Queensland, when an Australian bull ray, estimated to weigh about 100kg, attacked him.

Cameraman Justin Lyons, who witnessed the tragedy, said in 2014 that the stingray had stabbed at Irwin "hundreds of times", and that his final words were "I'm dying".

Mr Lyons said he and Irwin had come across a "massive" 2.4m-wide stingray in chest-high water.

They had planned to film the stingray swimming away from Irwin. Instead, it struck out, apparently believing Irwin's shadow was a tiger shark, one of its predators.

A stingray leapt onto a cruising boat and struck a woman's face, killing her, off the Florida Keys, a group of islands in south-east US.

The Los Angeles Times reported that the 34kg ray, which measured about 1.8m wide, was also believed to have died upon impact.

An 81-year-old American man was in critical condition after a stingray leapt onto his boat and stung him, leaving a 5cm barb in his chest.

Mr James Bertakis from Lighthouse Point, Florida, was with his granddaughter and a friend when the stingray landed on the boat.

He was reportedly trying to remove the metre-wide spotted eagle ray from the boat when he was stung.

The women steered the boat to shore. Doctors were able to save Mr Bertakis after removing the barb by pulling it through his heart and closing the wound.

Fatal attack? Depends on where victim is stung

All stingrays use the same attack mechanism regardless of size - a sting, up to 20cm long in a bull ray, located near the base of the tail.

The sting contains a sharp spine with serrated edges, or barbs. A venom gland sits at the base of the spine and a membrane-like sheath covers the entire sting mechanism.

When a stingray attacks, it needs to face its victim. Then it flips its long tail upward over its body and strikes whatever is in front of it.

In most cases, when the sting enters a person's body, the pressure causes the protective sheath to tear. The sharp, serrated edges of the spine then sink into the victim's flesh, and venom flows into the wound.

A stingray's venom is not necessarily fatal, but it can hurt a lot. It contains various enzymes and the neurotransmitter serotonin, which causes severe muscle contraction, resulting in severe pain.

The enzymes cause tissue and cell death. If the venom is in an area like the ankle, it can usually be treated. Heat breaks down stingray venom and limits the damage it can do. If the wound is not treated quickly enough, amputation might be necessary.

But if the venom enters the abdomen or chest cavity, the resulting tissue death can be fatal because of the major organs located there.

If the spike enters the heart, as was in Australian TV personality Steve Irwin's case, the results are typically fatal.