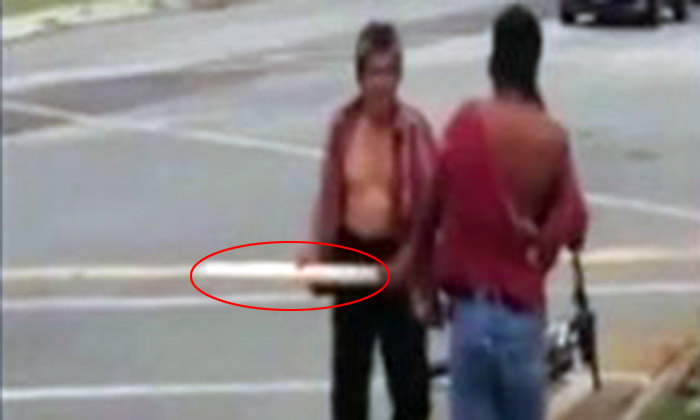 An elderly man was seen swinging a wooden plank and throwing punches at a worker at Race Course Road recently.

The viral video was shared on the 狮城大马联闻 Facebook page.

The four-minute long clip shows the elderly man, whose shirt is unbuttoned, chasing the worker on the street.

The worker's shirt is ripped, and the old man starts throwing punches at him.

A fallen bicycle can be seen lying on the road as well, and the two almost get knocked down by passing cars.

A few drivers even sound the horn at the duo, but this does little to stop the elderly man.

While many people stand around watching and filming the incident, none actually step forward to help.

The elderly man eventually picks up a plank and tries to hit the worker with it.

However, the worker grabs it from him and discards it.

Some people can be heard saying that the police have arrived, and the elderly man can be seen getting onto his bicycle.

The worker tries to stop him, but he pushes him away and rides off.

Many netizens slammed the elderly man for behaving as such.

No matter what the dispute was about, it was wrong of him to have physically assaulted the other man, said Facebook users.

Related Stories
Cheers to these heroes! Caucasian and S'pore guy stand up for woman hit by her BF
Truck driver breaks colleague's skull with beer bottle at Geylang restaurant after heated dispute over drinks
Men shout at each other in the middle of Toa Payoh road -- over a supermarket trolley
man hits worker with plank
fight
dispute