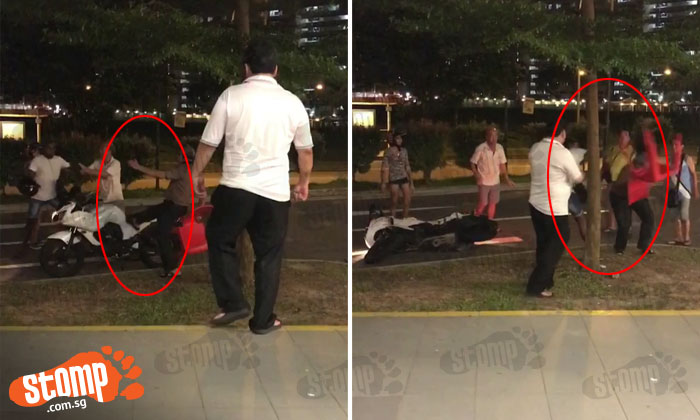 The following under-a-minute clip sent in by a Stomper shows a heated argument taking place between an angry motorcyclist and an old man.

According to the Stomper, the following incident took place at 12.17am outside the coffee shop at Yishun Street 31.

As seen in the video, the elderly man while holding on to a plastic red chair, kicks over a white motorcycle parked in front of him, angering the motorcyclist even more, making him attack the old man with his helmet.

The old man did attempt to use a plastic red chair to defend himself, but still got hit in the head by the helmet nonetheless.

A man in a white shirt is seen holding the angry motorcyclist back in many instances and telling him to stop, in efforts to prevent the dispute from getting any bigger.

"I was walking over to my block after alighting from my bus when I witnessed the commotion.

"What I've gathered from their shouting was that the angry motorcyclist accused the old man of trying to flirt with his wife and the old uncle wasn't too happy about that.

"The dispute ended when the people around stopped both of them from hitting each other and the motorcyclist's friends drove the bikes away to forcing him to walk away as well."

The funniest part? The motorcycle that got knocked over did not belong to the angry motorcyclist or the old man, but instead belonged to the motorcyclists' friend. He is later seen picking up his bike to drive off after the commotion subsides slightly.

What an angsty way to start a Tuesday huh?

What do you think of the above situation? Share with us in the comments below!+