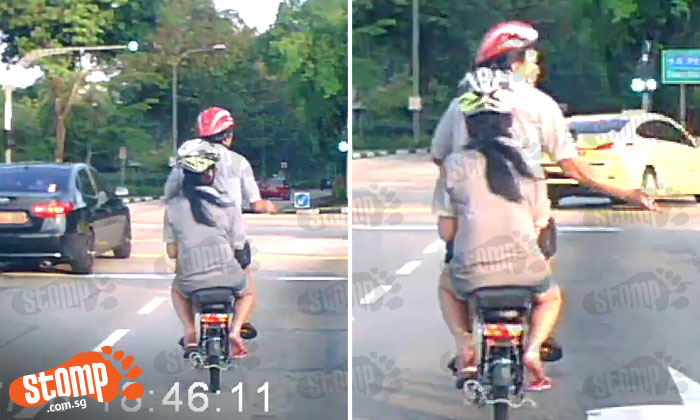 Stomper Henry was driving along Choa Chu Kang East Flyover on Jul 16 at around 6.30pm when he saw an e-biker with a pillion rider in front of his car at a traffic junction.

Both the Stomper's car as well as the e-bike were on the right-most lane of the road waiting for the traffic lights to turn green.

After the lights changed, the e-biker started riding in the middle of the lane and hogging traffic.

The Stomper honked at him twice to alert him to what he was doing.

Instead of giving way to vehicles, the e-biker nonchalantly continued riding in the middle of the lane, slowing down traffic.

As the Stomper was making a right turn at another junction along the road, the e-biker then rudely gestured at him with his right hand.

Said Henry with regard to what happened:

"He was hogging the lane. Traffic was moderate and not that heavy but there were still quite a number of vehicles on the road.

"I honked at him again after he gestured at me.

"I feel what he did was reckless. He was endangering not just his own safety but that of other road users as well."