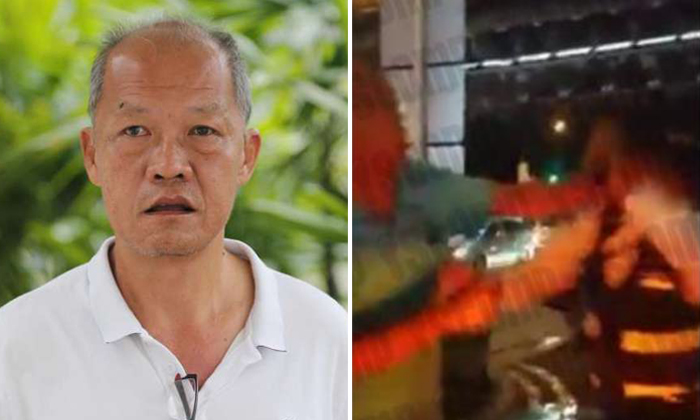 An Uber driver who exchanged blows with a traffic warden and used abusive words on him was yesterday jailed for a day and fined $2,000 - which became an additional two weeks' jail when he did not pay the sum.

Goh Kok Ling, 60, pleaded guilty to fighting with Tan Hock Guan, 51, disturbing the public peace, and uttering a vulgarity in Hokkien at Tan at the Bugis Junction taxi stand in Victoria Street at about 7.15pm on Nov 27 last year. Tan had received a similar sentence in May this year.

Deputy Public Prosecutor Daphne Lim said Tan, then a Land Transport Authority traffic warden, was standing at the entrance of the taxi stand at Bugis Junction when he told Goh, who was driving a Toyota Corolla Altis car, not to enter as the taxi stand was only for taxis.

He indicated to Goh to proceed to the pick-up and drop-off point instead.

Unhappy, Goh told Tan to speak to his passenger, who wanted to be picked up from the taxi stand.

Tan took a photo of Goh's car after his passenger boarded. Goh alighted, touched Tan on his shoulder from behind, and challenged him to issue a summons.

Tan told Goh not to lay hands on him, adding that he had recorded a video and that Goh could expect action to be taken against him.

Goh later leaned over to Tan and uttered the vulgarity. Tan retorted the same in Hokkien and punched Goh once in the stomach.

Goh retaliated and both traded punches. When Goh slipped and fell to the ground, Tan kicked him.

A passer-by broke up the fight. But the scuffle did not end there.

When Tan moved to the other side of the taxi stand, Goh followed and confronted him. Tan punched Goh. They fought again and were separated by the same passer-by.

Mr Tan said Goh had to pay close to $20,000 in medical fees, in particular, to replace two teeth he lost as a result of the assault.

Goh could have been jailed for up to one year and/or fined up to $5,000 on each charge.