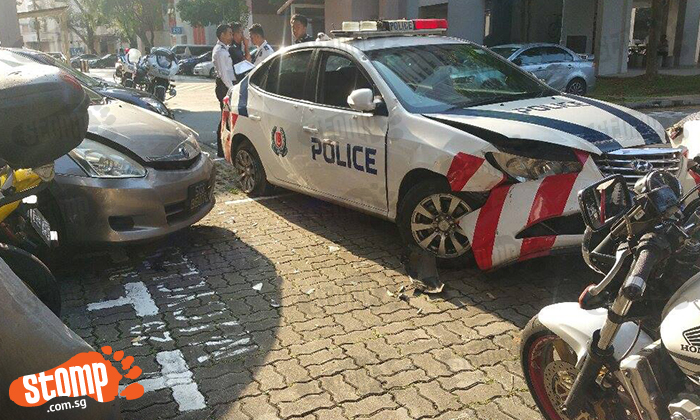 Stomper Benjamin was on the way to his parked car at the open carpark of Blk 217 Jurong East St 21 yesterday morning (Mar 9) when he heard a loud crash.

Upon reaching the carpark, he discovered that a police car had crashed into several other vehicles.

The police told Stomp that two police cars, three cars and three motorcycles were involved in the accident.

Benjamin told Stomp that the owner of one of the affected cars, a silver Mitsubishi Lancer, had come down to the carpark to go to work, when he was greeted with the sight of his wrecked car.

In the photos and video that Benjamin sent to Stomp, a grey Toyota Wish can be seen to have hit the lift shaft of one of the blocks. This was confirmed by Member of Parliament for Yuhua Grace Fu, who said in a Facebook post:

“I understand that one of the cars had collided into a lift shaft of an HDB block.

“I would like to assure residents that the damage was not structural and does not compromise the safety of residents.”

Benjamin said the driver of the police car had most probably lost control while turning into the carpark, which is located near the Jurong East Neighbourhood Police Centre.

According to Benjamin, there were two people in the police car, and the driver was injured. He saw an ambulance at the scene.

Police officers can also be seen in the photos and video inspecting the damage to the affected vehicles.

“At around 7.30am, the SCDF was alerted to a call for ambulance assistance at an open carpark of Jurong East St 21 near Block 217 and dispatched one ambulance to the scene.

“A Chinese man was assessed with minor injuries, and refused conveyance to hospital."

“This is not the first time an accident has happened at the carpark.

“As there is a student care centre in the vicinity, and residents of the area often walk across the carpark, I hope that drivers will drive carefully.”

Police said that investigations by the traffic police are ongoing.

Related Stories
Trying to show off? Watch Nissan GT-R speed through carpark and smash into oncoming car
Driver warns kids not to play dangerously at Jurong Point carpark -- only to get screamed at by their mums for honking
Youths treat public carpark like their own playground, climbing over cars and spray-painting walls
accident
car and police car collide
carpark
scdf
police