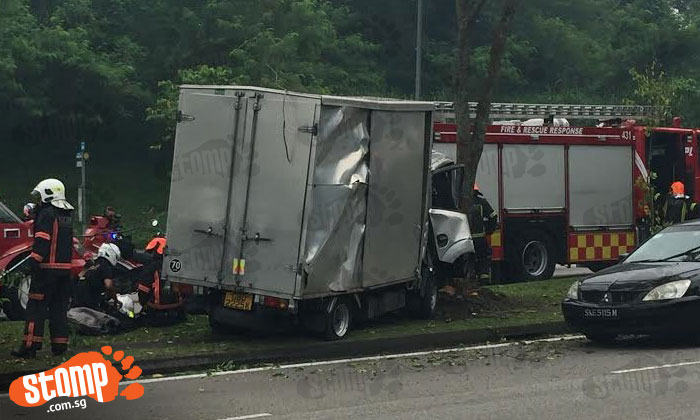 A driver crashed his lorry into a tree along Mandai Road yesterday morning (Aug 26) at around 10am.

Stomper Ricky who was passing by the scene of the accident snapped photos and a video of what happened and sent them to Stomp.

The Stomper is unclear what caused the accident, but reported seeing the driver of the lorry being stretchered off by paramedics.

The front of the lorry was crushed due to the impact. It's cargo hold was also damaged after the accident.

SCDF personnel can be seen attending to the victim in the photos the Stomper sent.

"SCDF received an alert at around 9.55am for a road traffic accident along Mandai Road.

"We dispatched one fire engine, two fire bikes and one ambulance to the scene.

"Upon arrival, no one was trapped.

"Two male Malays in their twenties were conveyed to Khoo Teck Puat Hospital."