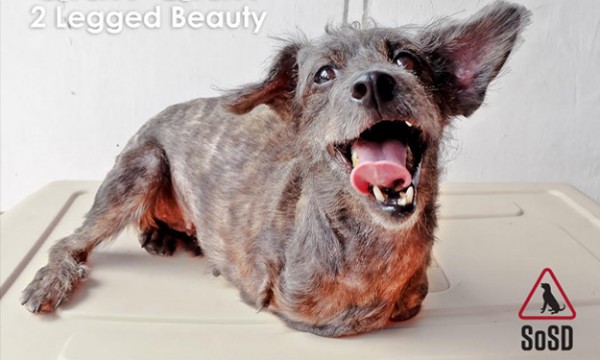 Stomper STW shared an inspiring story of a two-legged dog under his care.

He wrote in to Stomp about the canine in an email:

"It is an understatement to say that Qian Qian is a very special girl.

"Her story is one of heartbreak, perseverance, love, and triumph against the odds. She was born on an offshore fish farm in Singapore without her 2 front legs - a result of accidental inbreeding.

"She spent the first years of her life neglected, left to herself to lie in her own urine and faeces most of the time, locked up in a cage. But the little one would not give up. She would hop, jump, drag herself to get around. That soon that resulted in sores on the underbelly.

"Soon, as she grew to to adulthood, her owners did not want her anymore. But Qian Qian was lucky. Another fish farmer took her in, and took good care of her, taking pains to keep her clean, prevent sores, nurse her.

"Qian Qian never lost hope, and remained a cheerful, friendly girl to both people and dogs. Now, at 7yrs old, her future remains uncertain: Her kind owner has fallen ill, and will be selling her fish farm. Together with 3 others, Qian Qian was taken over by SOSD, and is now with a fosterer.

"Many people have asked us why we did not put Qian Qian to sleep: that it is cruel to let her live. But the truth is, this girl really is not suffering at all!

"She is always cheerful, bubbly, and loves life! She loves interacting with humans, dogs, and never lets her disability bring her down.

"Dogs are amazing creations. Devoid of ego or self absorption, they make the most of what they have. They do not wallow in self pity, and instead, always look on the bright side of life.

"Watch Qian Qian's video here, and fall in love with her, like we did!"

Find out more about Save Our Street Dogs' (SOSD) amazing work here and see the gallery below for more images of Qian Qian.