Today's train delay: Passengers stuck on train for at least one hour with little ventilation 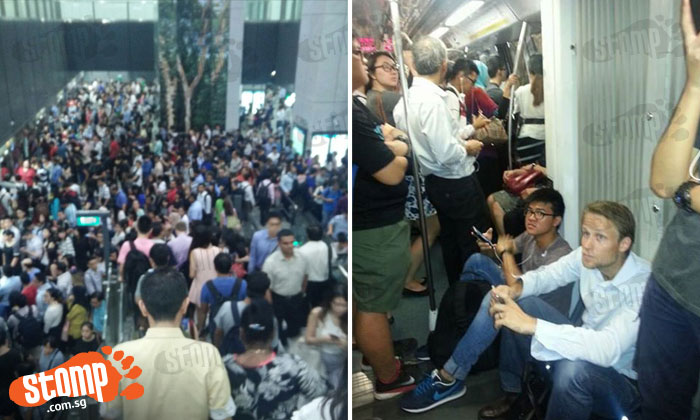 In a joint statement this afternoon (Nov 2), the Land Transport Authority (LTA) and SMRT said that they had arranged with the Infocomm Media Development Authority and mobile network operators to suspend telecommunication signals along stretches of the line for short periods of time to assist in investigations, should similar singalling faults recur, reports The Straits Times.

Commuters were left frustrated today (Nov 2) after yet another train delay due to a signal fault, this time on the Circle Line.

The fault disrupted service on the Circle Line from Botanic Gardens to Serangoon MRT stations.

Stomper Yasodai was on her way to Marymount MRT station when the train she was travelling on stalled between Caldecott and Marymount.

"They kept announcing that there was a delay but nothing was being done.

"Many commuters sat on the floor as it was very stuffy.

"I heard a commotion somewhere along the cabin as somebody had fainted.

"A nurse on board offered to help any passengers who needed attention."

"When we finally arrived at Marymount MRT Station, I saw Singapore Civil Defence Force (SCDF) officers who gave glucose water to the woman who had fainted earlier."

"We did not receive any reimbursement of fare or even an apology."

Stompers Michelle, K and Cin were also affected by the signal fault.

Cin was on another train on the Circle Line travelling from Serangoon MRT Station to Lorong Chuan when the train suddenly stopped and headed back to Bartley in the opposite direction.

She exclaimed, "I didn't know what was happening!"

Several other confused commuters rushed out of the train at Bartley to catch the train travelling towards Lorong Chuan.

Others gave up and exited the station to take a taxi to work or school.

Cin also saw many students request for a Travel Chit from station staff to present to their teachers.

In a response to media queries, SMRT said in a statement the CCL had encountered intermittent signal interference which caused a number of delays along the network, reports The Straits Times.

"This resulted in one train that stalled between Marymount and Botanic Gardens stations in the direction of Dhoby Ghaut," the statement added.

"We are sorry for the inconvenience caused this morning. Our engineering staff are investigating the matter."

Normal train service only resumed at around 10.27am, about three hours after SMRT had alerted commuters to the fault.