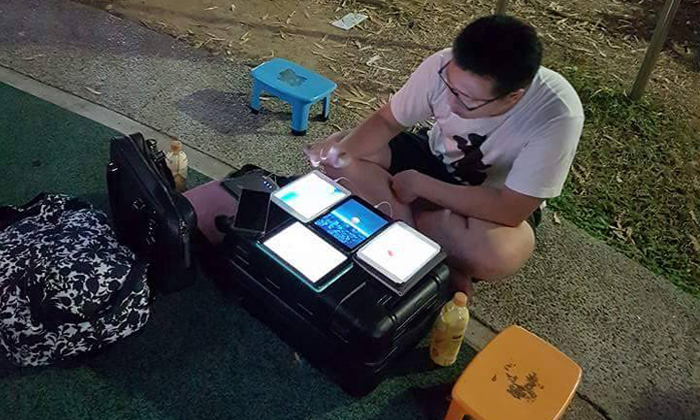 They say to go big or go home -- and this Pokemon trainer has clearly made his choice.

The picture was first uploaded by All Singapore Stuff and has since gotten over 1,000 shares.

It shows Tan comfortably decked out to hunt for Pokemon, with four different tab: lets displayed on a makeshift table. He appeared to have even brought stools along.

Tan, who identified himself as the man in the photo, said: "It's really interesting that many people think that the way I play is really insane, which I do have to agree."

However, he enjoys challenging himself and plays other games such as MapleStory and Clash of Clans in a similar manner too.

He added: "Most of the time when I play an online game, I play multiple accounts just to double or triple the fun for myself. Some people may not be able to handle it, but with practice, it's possible to do so."

Tan's unusual gaming ways have attracted the public's attention, with many people approaching him to ask for tips.

Want to pick up some Pokemon hunting skills too? Tan has generously offered to share his expertise:

"I'm willing to give any tips that I know if you are willing to drop by to meet me and certainly be happy to receive a 'hi' from any Singaporean who is near Hougang Ave 10, Block 401. I will be stationed there from 5pm to 3am, almost everyday. Feel free to drop by to say hi or join me and my friends for a Pokémon Catching and Chatting session," he wrote.

Related Stories
Pokemon trainers occupy parking lots at Hougang Ave 10: One even challenges resident to call the police
More Pokemon Go madness at Hougang and Toa Payoh: Trainers dash across road and make a lot of noise at 1am
Sea of Pokemon hunters storm across road Hougang Ave 10 to Punggol Park, blocking oncoming cars and buses
Seriously guys, the game is not worth your life! 'Crazy' crowd near Block 401 in Hougang rushes across road to catch Pokemon
More About:
pokemon
Pokemon GO
funny