This guy thinks it's TransCom officer's job to help elderly find a seat, netizens make sure to teach him a lesson 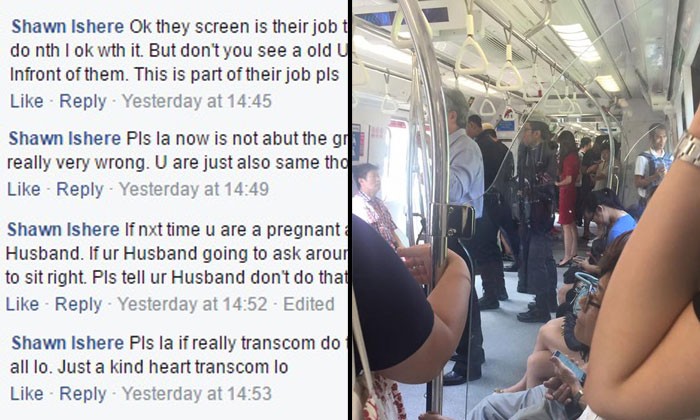 We've all been taught to give up our seats to people who need it more than us.

But after seeing a group of transcom officers standing on a train while a man with gray hair stands near by, Facebook user Shawn Ishere took to Facebook, blaming the officers for "just standing around" doing nothing when there is a old uncle right in front of them.

He  accused the officers of not doing their job because apparently its the the Transcom officer's job to help find people their seats.

"What are those Transcom doing their job? just come in and stand there? is standing their job?! WTF. One old uncle standing right in front of them and there's no ppl stand up to let the Uncle sit. Then the Transcom office also not doing anything."

He even says that if they do not want to get Stomped, they should have just asked the people sitting down to get up in order get the elderly a seat. Oh, the irony.

However netizens were quick to critcise Shawn. Many challenging him, asking if it was so easy why Shawn had not gone to the older man's aid instead of just taking a picture and 'hiding in one corner'. Some saying that he had no respect for the officers.

Others were sure to put him straight, educating him that it is the citizen's job and duty to help give up their seats, not the officer's. Instead it is the transcom officer's job to add an extra layer of security on our trains and act as a deterrence to any potential threats.

Related Stories
Police investigating netizen who threatened to 'open fire' on LGBT community
Netizen responds to Loyang Green abuse case: 'I punched my dog in the face and punished her too'
Stomper slams netizen's "senseless" comment about S'porean who died while trying to save daughter
police
MRT
facebook
netizen gets trolled