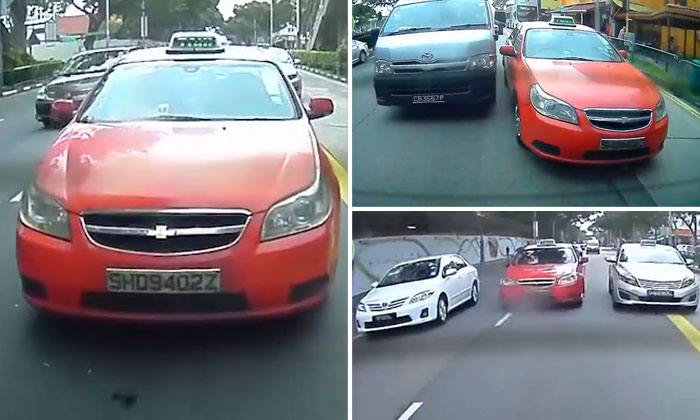 Submitted by Stomper Shah and Edwin

Stompers Shah and Edwin alerted Stomp to a video online showing a cabby committing not one but three reckless acts on the road in a span of one-and-a-half minutes on Dec 15 at around 9am.

In the video posted by Roads.sg, a red-coloured taxi with licence plate number SHD9402Z can be first seen travelling on the third lane of of a four-lane road.

The cabby then abruptly filtered his vehicle left into the second lane, just as a grey-coloured car was approaching at its rear.

The driver of the car had to slow down to avoid hitting the taxi.

The next reckless act came 20 seconds after the cabby switched lanes.

At the 55 second mark of the video, a silver-coloured van can be seen trying to filter into the lane the taxi was travelling on.

As the van passed the lane markers, the cabby sped up his or her vehicle in an attempt to overtake the van. While doing so, the cabby squeezed the taxi between the van and an SBS bus.

It came precariously close to the van, only avoiding an accident by mere centimetres. The cabby then applied the brakes of the taxi after overtaking the van before accelerating off again.

The third reckless act came towards the end of the video.

A silver-coloured taxi was filtering right into the second lane.

Similar to what happened to the van, the driver of the red taxi sped up and went beyond the boundaries of his or lane before overtaking the silver-coloured taxi.

The cabby then appeared to play the 'braking game' once again, abruptly slowing down his taxi after committing the reckless act.

The video has garnered more that 250,000 since it was posted yesterday (Dec 22). See what happened below.

Related Stories
Look how close motorcyclist comes to being knocked down after making reckless turn
Drunk or sleepy? Van driver sways from side to side and keeps jamming on brakes on BKE
reckless
dangerous
accident
taxi
cabby