Think your Pidgeot or Fearow is majestic? This bird spotted at Woodlands will put them to shame 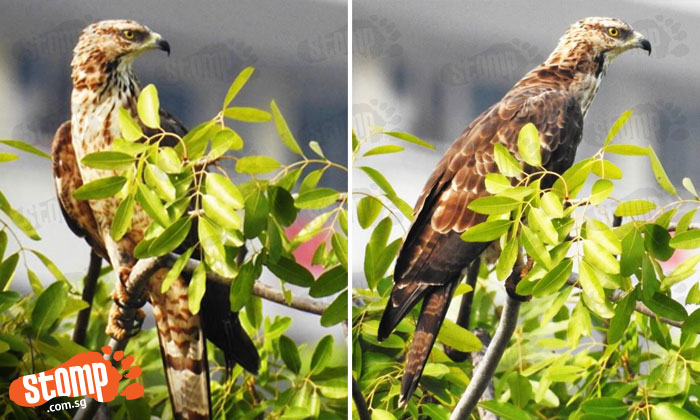 Stomper Kannan made an unusual discovery at Woodlands Avenue 5 this morning (Aug 9).

Shared an account of what he came across in an email to Stomp:

"Caught the sight of the Pied Harrier, an Asian species of bird of prey from the family Accipitridae.

"It was certainly a rare sighting as normally we don't see birds of prey appearing among the common birds like the Javan mynah, pigeons or sparrows in the heartlands.

"Not sure where this bird flew from, but it looks very huge from a distance especially when it started flying.

"I believe this bird is a female as it had brown streaks on body, dark bands on its flight feathers with a whitish uppertail coverts and yellow irises.

"From some angle its fiery face looked like an owl.

"Managed to capture some shots of the bird while it was resting briefly on a tree branch.

"It disappeared shortly after."