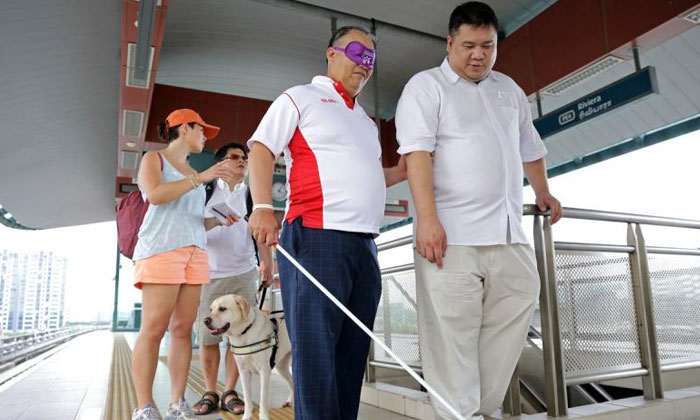 What is it like to travel around Punggol blind?

More than 60 participants got a taste of it, as they went around the town blindfolded on Saturday.

Organised by the Guide Dogs Association of the Blind and non-profit Social Innovation Park, the event aimed to help people gain a better understanding of the difficulties faced by the visually-impaired in their daily commute. This includes knowing when to alight from buses and figuring out train directions.

A total of 66 participants from government agencies, Punggol grassroots and various organisations such as public transport operator SMRT, took trains and buses via designated routes around Punggol.

The activity involved participants setting off in groups of four. Each group would have two participants blind folded, a facilitator and one visually impaired ambassador.

The idea for this event was mooted by two visually-impaired Singaporeans Melissa Yeo and Dr Yeo Sze Ling.

Ms Yeo, who lost her sight eight years ago, said she hopes this exercise will help Singaporeans to step in the shoes of those who are visually handicapped and better understand their difficulties when taking public transport.

Building an inclusive society is more than just having the visually handicapped around, said the 43-year-old, but it's to lead independent lives.

Mr Ng Chee Meng, MP for Pasir Ris-Punggol GRC and Minister for Education (schools) and Second Minister of Transport also took part in the activity. As part of his commute, he took a bus from Punggol East to Punggol LRT blindfolded.

Participants will also share their experience after the event so that their feedback can be taken into consideration in future town planning and policy making.