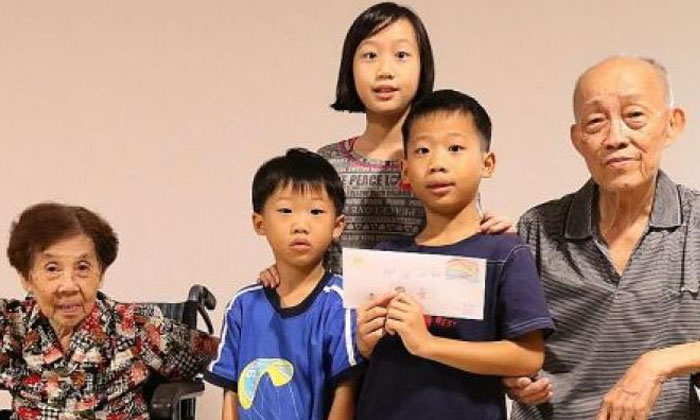 The three children shyly handed an envelope containing $500 to the elderly yong tau foo seller. Most of the money had come from their piggy banks.

Trinity Ong, 10, her brothers Noah, 8, and Caspar, 5, and their parents - were among the 20 readers who contacted The New Paper last week to offer to help Mr Neo.

On Sunday, the family visited Mr Neo at his two-room flat in Jurong West to hand him the donation, along with some fruits.

Mr Neo, who has to support his wheelchair-bound wife and diabetic son who also needs a wheelchair because of a leg amputation, said: "I don't know how to thank you."

He and his wife, 78,were beaming as they offered the family packet drinks.

The fire destroyed a wet market and coffee shop. Another coffee shop at Block 494 was also badly damaged.

A total of 51 stalls were destroyed, leaving stallholders at a loss over their livelihoods.

Lim Ying Siang, 41, was charged in court on Saturday for allegedly causing the fire.

When Trinity's mother showed her the TNP report on Mr Neo, she immediately said she wanted to help.

The Cantonment Primary School student said her grandparents, who are about Mr Neo's age, had not worked for the past 10 years.

She said: "At his age, he should have retired. It's very tough for uncle to continue working."

She showed her two brothers the article. They immediately poured out the contents of their piggy banks and started counting.

Their mother, Madam Angela Lee, 40, said: "Trinity asked me, 'How do we find the uncle? We have to find him and help him'."

The couple are healthcare professionals.

Madam Lee said: "I told them to give an amount they're comfortable with, but they ended up giving everything in their piggy bank savings.

Trinity, who wants to be a doctor, said: "I can always save again. I just want to help the uncle."

Madam Lee said her children have always been willing to help others.

"They always give money to the people who go door-to-door to sell things like tissue paper," she said.

"Since they were young, I've taught them the concept of money. So if they want to buy toys, they'll have to use their own savings.

"I motivate them by giving them rewards when they help out with household chores or get good results in school."

Another donor, Miss Jenn Woo, 30, who works in the marine industry, read the TNP article on Facebook. She visited Mr Neo on Sunday afternoon and gave him $350 - a donation pooled together with five other friends.

She said: "I am the sole breadwinner... I understand how tough it can be. My mum is suffering from kidney failure, and my dad is a retiree with minimum savings.

Mr Paul Tan, 40, an accountant, who visited Mr Neo last Saturday, along with his wife and 18-month-old son, donated $2,200. He had collected the money from five friends - of which $1,000 came from his own pocket.

He said: "Mr Neo is a very dignified man, he initially rejected the  donation. But I told him we're donating not out of pity, but out of respect.

"When I told him to raise his yong tau foo prices (because he charges less than other sellers), he said he would feel bad for his customers. What a kind man."

Market to be cleared

The wet market at Block 493, Jurong West Street 41, which was destroyed in last Tuesday's blaze, will be demolished.

The fire caused the roof of the market to cave in.

Jurong GRC MP Ang Wei Neng told reporters on Sunday that demolition works will begin as early as this week.

The Housing Board (HDB) began propping up the structure on Friday, and stallholders were allowed to enter the site on Sunday.

The stallholders entered the site under close supervision of HDB's professional engineer. They alsohad to wear protective gear.

Mr Ang said: "I think most, if not all, of the displaced stallholders realised that the market and the coffee shop were almost completely destroyed, and it's quite impossible for them to go inside and retrieve the items by themselves. But they need closure."

Mr Neo Chwee Eng, 81, who owned a yong tau foo stall at the market, told The New Paper: "I couldn't even tell where my stall was. Everything was burned, and no one could salvage anything."

At a meeting last Thursday with Mr Ang and representatives from HDB and the National Environment Agency (NEA), the stallholders were given a list of alternative locations to resume their business.

However, Mr Ang said only a few were interested.

A job fair focusing on the food and beverage sector will be held on Oct 27 at Jurong Green Community Centre for those who do not want to move to a temporary stall.

Said Mr Ang: "I hope they can get a job through the work job fair or other means to help them tide over this period of time."

Meanwhile, an HDB spokesman said HDB and NEA will continue with daily disinfection, anti-mosquito treatment and clearance of the debris, to get rid of the stench from the food items destroyed in the fire.