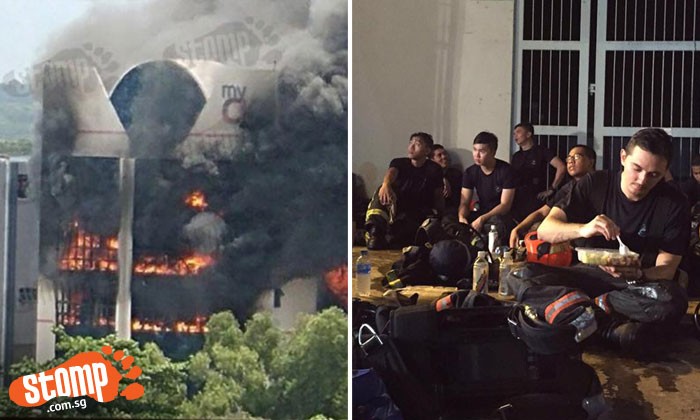 The SCDF has posted photos on Facebook showing brave firemen taking a break after fighting the huge fire at CK building yesterday.

Photos received by almost 40 Stompers show several levels of the building in Tampines engulfed in flames.

The photos posted by SCDF at around 9pm show the firemen having their meals together. According to a caption on the photos, they were redeployed into the building to fight the fire again thereafter.

Their actions have earned praise from K. Shanmugam.

Said the Home Affairs and Law Minister on Facebook:

"A fire was reported at Tampines at about 1.30pm. Singapore Civil Defence Force officers have been working hard for the last 9 hours to to keep the situation under control.

"Our officers work under challenging circumstances. An officer was conveyed to the hospital for heat exhaustion. The operations are still ongoing.

"These photographs show our SCDF officers taking a short break, before being redeployed into the building. We are grateful to the officers for their hard work."

Thank you SCDF personnel for your hard work and fighting spirit!