The Western Co. takes down Facebook page, while local food blogger claims they haven't paid him for advertorial 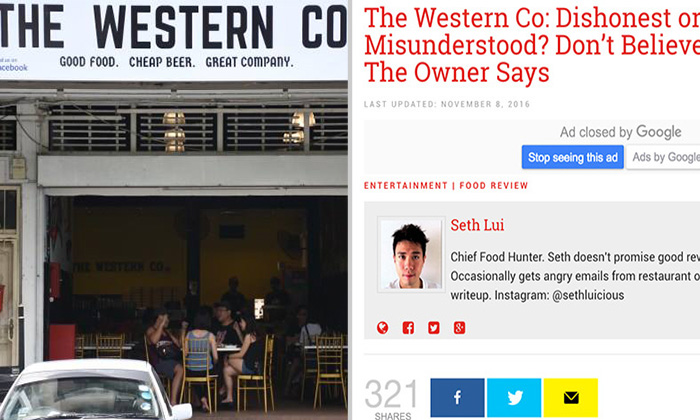 If you are thinking to yourself, "When will this whole The Western Co. fiasco end?", well, word on the street is that The Western. Co has since taken down their Facebook page.

After an overwhelming backlash for their poor attitude, service and sarcastic responses to online criticisms, The Western. Co had initially wrote a Facebook apology post, stating that they planned to hire a social media agency to help them better serve their customers.

However, many netizens continued to slam the eatery, saying that hiring a social media agency would not help resolve the staff's poor attitude and service.

Just yesterday (Nov 7), the Western Co. deleted their apology post, which they posted on Nov 6, and has also taken down their Facebook page.

Local popular food blogger Seth Lui then added fire to the flame by writing a blog post, allegedly claiming that The Western Co.'s lady boss, Yang, still owes him money for an advertorial on his site.

Seth's blog post was widely circulated, and shortly after, he tweeted that The Western Co. has threatened to sue him.

An hour after Seth tweeted, he tweeted an update to say that The Western Co. has offered to make payment.

"Western Co offers to make payment for previous work, so we'll be taking down the article," said Seth.

Five hours later, around 7.30 in the evening, Seth posted on Facebook, saying:

"When you receive endless calls from the girl in your piece crying and begging you to take down a blog post, and saying 'does it make you feel better if i die?', you kinda have to step back and reevaluate.

"Their reputation is in shambles, Facebook page taken down, a name now remembered by most Singaporeans - that's how scary the social media impact was.

"I know many people will say I lack journalistic integrity but that's my decision about the issue to close it, good or bad. The damage is done, time to move on."