Thank you for lifting my mood, says cyclist to stranger who left chocolates on his bicycle at Khatib 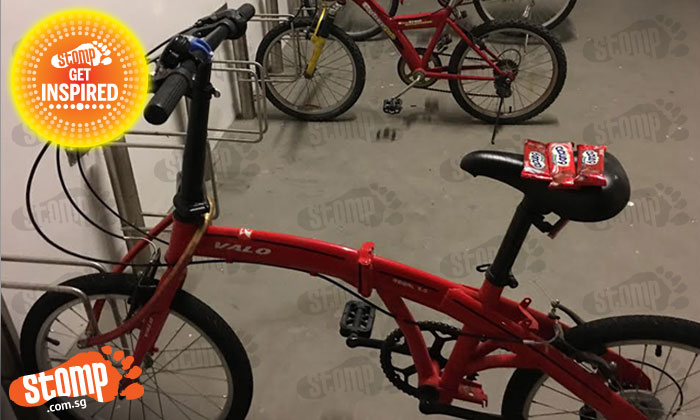 Stomper Cycler was on the way to collect his bicycle at a void deck near Khatib MRT station yesterday (Jul 8) at around 9.50pm when he saw something unusual on its seat.

"From afar, I noticed that something was on my bicycle seat. Initially, I thought it was litter.

"Upon closer inspection, I realised that they were in fact chocolate bars.

"I was initially skeptical about their origins; perhaps they were spoilt.

"Their expiry dates however are in 2017.

"I then saw that two other bicycles adjacent to mine had chocolate bars placed on them too.

"I wish to let whoever who placed those chocolate bars on my bicycle know that I sincerely appreciate this small little warm gesture. It was also rather timely as I just had an argument shortly before.

"Thank you for spreading this little joy to us :)

"It truly lifted up my mood. Thank you! #sharingiscaring #spreadalittlejoy."

Stomp would like to speak to the person who left the chocolates on the bicycles. Kindly write in to us at stomp@stomp.com.sg if you know how we can contact him or her.