Thank you Giant Adventure Team and Star Cruises for keeping cyclists in Japan safe from the typhoon! 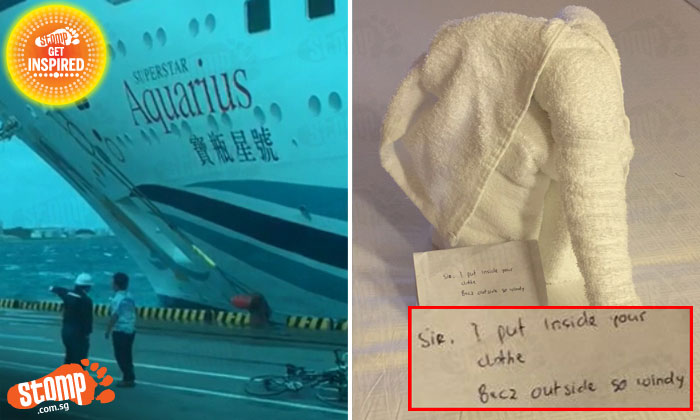 Stomper Adrian went on a cruise on board Star Cruises ship SuperStar Aquarius to Naha, Japan, for a cycling tour.

Unfortunately, his tour had to be cancelled due to a typhoon.

A day of bad weather however was brightened up thanks to the efforts of event organiser Giant Adventure Team and Star Cruises.

The Stomper was impressed by their resolve to ensure the safety of the participants.

He told Stomp that he was having lunch on land when he was told to head back to the ship that was docked at Naha Cruise Terminal.

After he returned to his cabin, he discovered that house keeping crew had brought in his cycle jersey he was airing outside.

"The house keeping crew took the initiative otherwise the cycle jersey I was airing would probably be out in the sea.

"Kudos to Star Cruises and Giant Adventure Team for thinking about safety first!"

Have a look at them below.