Teaching beyond the classroom walls? Students at Marsiling Secondary School to have lessons in vertical farm starting next year 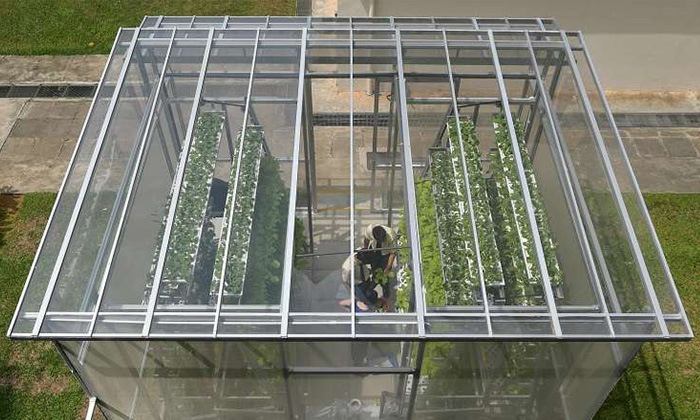 Students at the newly merged Marsiling Secondary School can look forward to having lessons next year in a water-driven vertical farm that will grow vegetable crops.

The $26,000 farm, set up together with local innovator Sky Greens, will be used for lessons in science and national education - for instance, to teach students about land-scarce Singapore's efforts in ensuring food supply resilience.

Principal Goh Aik Choon said the school, which will have about 1,200 students from Marsiling Secondary and Si Ling Secondary, wanted to show them vertical farming in real life. The idea is also in line with its niche programme on environmental education, which Marsiling Secondary is known for.

The school won a President's Award for the Environment in 2012 in recognition of its efforts in managing its own environmental impact, including the use of light sensors, solar panels, waterless urinals and a rainwater harvesting system.

It will also adopt Si Ling's emphasis on sports and outdoor education, which includes adventure camps and expeditions.

Said Mr Goh: "We are treating this merger as a chance to merge both schools' strengths and capabilities. It's evolving into a new identity, no longer purely Marsiling or Si Ling."

In preparation for a new retail operations subject, the school has also converted a classroom into a minimart space for students to learn practical skills.Thirty-six Secondary 3 students will be taking the subject, which imparts hands-on knowledge in areas such as merchandise display and customer service.

"This is a new chapter for the school," he said, adding that its vision, mission and school uniform are still being finalised.

For now, the teachers and students have already got to know each other through team-building sessions that began in November.

Some students from the same co-curricular activities (CCA) in both schools also had joint training that started as early as June to prepare for major competitions early next year.

"There's no better way than mixing the students across both schools and different levels through their CCAs like dance, soccer, band," said Mr Goh.