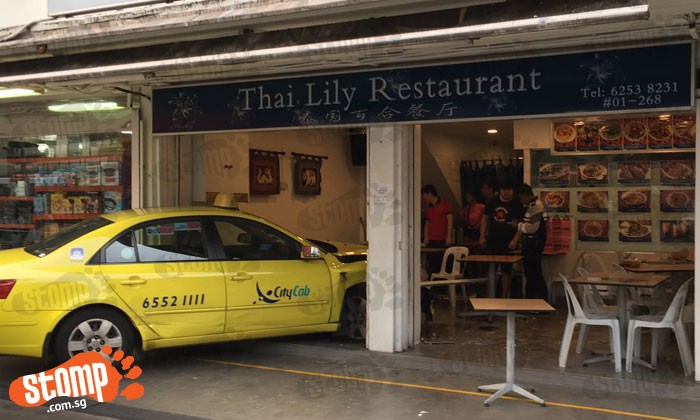 A taxi crashed into a Thai restaurant at Block 107 Lorong 1 Toa Payoh just yesterday (Nov 15) at around 5.20pm because the cabby stepped on the acclerator instead of the brake when he was making a three-point turn.

Stomp was alerted by Stomper Ng who almost got hit by the taxi during ht incident,

A spokesman for ComfortDelgro, which runs CityCab, said, "Our cabby sustained slight injuries and is now recuperating in hospital. We are in touch with the shop owner and will be assisting the police in their investigations."

According to The Straits Times, there were no diners at the time of the accident.

The restaurant owner, who wants be named only as Mr Kiat, mentioned that his workers were in the kitchen at the back of the outlet.

The 19-year-old said, "The damage is mainly to the pillar at the entrance and a few tables and chairs. I hope it will be safe to reopen soon, as we need to continue paying rent."

He had started the business about nine months ago and according to his landlord, Albert Chow, his rent is around $9600.