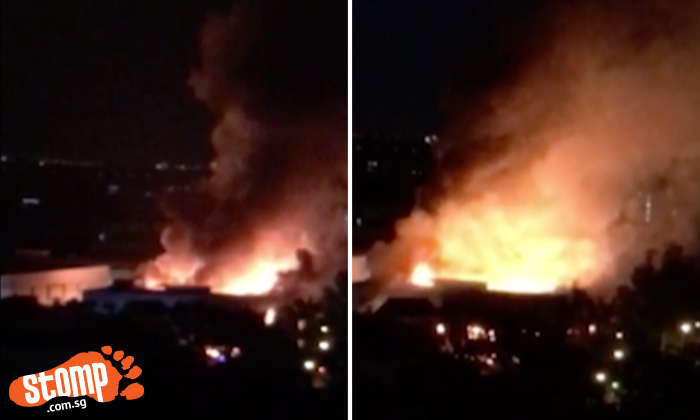 Stomper Aranas spotted the fire at around 5am today (Nov 2) at 65 Sungei Kadut Loop.

The Stomper recalled hearing loud noises before the fire started.

He said: "I thought it was thunder, but when I looked out of the window, I saw the fire."

According to a post on SCDF's Facebook page, "a total of 19 SCDF appliances, including 2 Unmanned Firefighting Machines (UFM), and 80 firefighters were involved in the operation".

There were seven people trapped in the premises at the time of the incident but they were all rescued with no injuries reported.

According to a Straits Times report, they were delivery drivers who were sleeping overnight at the warehouse.

The rooftop of the warehouse had collapsed and the second and third floor were damaged.

There are no reported casualties in this fire incident. The cause of the fire is under investigation.

Related Stories
Fire breaks out at HDB flat at Block 402 of Jurong West Street 42
Old man suffering from depression sets himself on fire at Geylang open-air carpark after losing his job
Bedok South fire: Retiree's flat destroyed after he tried to put out flames with water
fire
sungei kadut