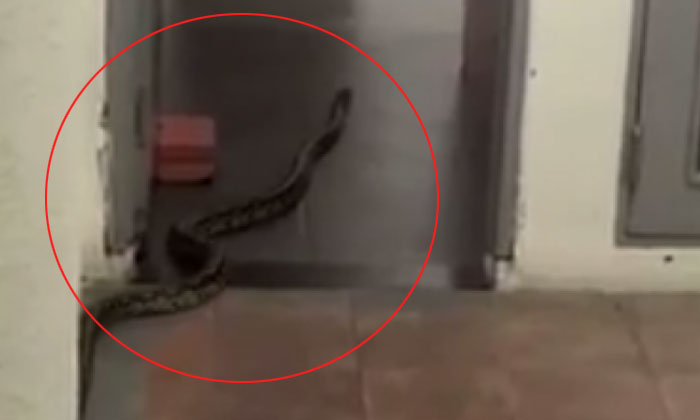 A python was found at a hall of residence at the Nanyang Technological University (NTU) on Wednesday (Oct 12).

NTU said that its campus security received a call at 2.45am from a hall guard about the snake at Hall 15.

"With the help of a pest control service, the snake was caught at 3am and taken away," said a spokesman from NTU. "No one was injured in the incident."

Student Koh Xiu Ming, 20, saw the reptile in the corridor outside his room on the ground floor, as he was returning from the toilet at Block 72 in Hall 15 at about 2.20am, school newspaper The Nanyang Chronicle said.

The snake, estimated to be 2m long, then crawled from the corridor to the nearby toilet, where Mr Koh had just been.

Mr Koh told his roommate, Lucas Leong, who said he was "shocked" at the sight of the snake. They called the security guard, and a few other students came to look as they waited for help to come.

Mr Leong, 22, took a video of the snake slithering across the corridor.

It was the first time they have seen a wild animal at their dormitory, which is near a forested area, Mr Leong said.

This is not the first reptile sighting at the university located in Boon Lay.

A cobra and a python were seen fighting outside the Research Techno Plaza in NTU last August.

Other wild animals such as pangolins and wild boars have also been spotted on campus.