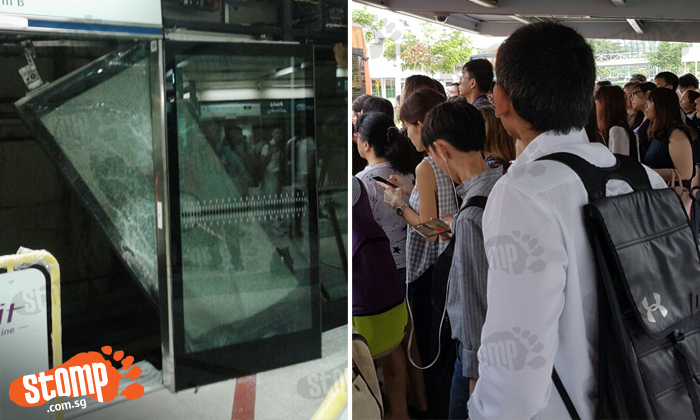 The incident caused train service between the Sixth Avenue and King Albert Park stations to be halted.

Stompers Eric, Alex, Gabriel, Mei Chi, Jeffrey, Paul, Gavin, Marianne, Rashi and Kelly had shared with Stomp photos showing the dislodged door -- with its glass cracked -- as well as large crowds that were caught in the delay.

Eric said he had been at MacPherson MRT Station when he heard an announcement informing commuters that there would be a train delay of five to ten minutes.

He added, "News announced that there would be no trains on the Downtown Line. However, when I reached the Circle Line at Serangoon station, it is also affected. And now it is jammed with commuters with a 13-minute wait to Dhoby Ghuat."

Social media users on Twitter also shared about how they had to wait for up to 20 minutes for their train.

Stompers Rashid and Mei Chi said there were free shuttle bus services between the Botanic Gardens and Beauty World stations, that were available even after train service resumed.

According to a tweet from SBS Transit, service on the Downtown Line resumed at 8.25am.

DTL service has resumed since 8.25am. Free bus rides and bridging buses are still available at designated bus stops.

However, the affected platform screen door at Sixth Avenue station was not in operation even as trains pulled in and out of the station, reported The Straits Times.