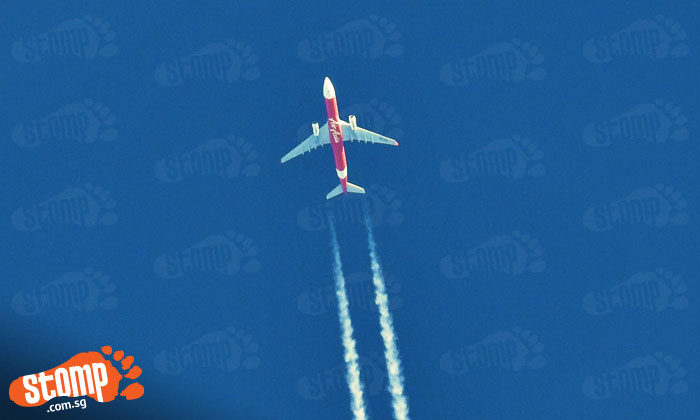 Stomper Kannan managed to capture the amazing sight of contrails produced by an overhead airplane with his point-and-shoot NikokP900 camera.

He shared his photos with Stomp taken from Woodlands in the evening on July 11 of an Air Asia plane.

"When the skies are clear, there are chances of seeing contrails("condensation trails") which are line-shaped clouds said to be produced by aircraft engine exhaust leaving a straight mark in the sky.

"They are also known as 'vapor trails' Sources reveal that "contrails composed primarily of water, in the form of ice crystals.

"The combination of water vapor in aircraft engine exhaust and the low ambient temperatures that often exists at these high altitudes allows the formation of the trails.

"I managed to zoom to the contrail left by the plane using the Nikon P900 camera.

"Upon closer observation after the image was captured, I realised that the contrail was left by an Air Asia Plane, whereby the logo was clearly visible.

"Certainly I did not expect the airplane to be identified though have previously spotted various contrails in the past."