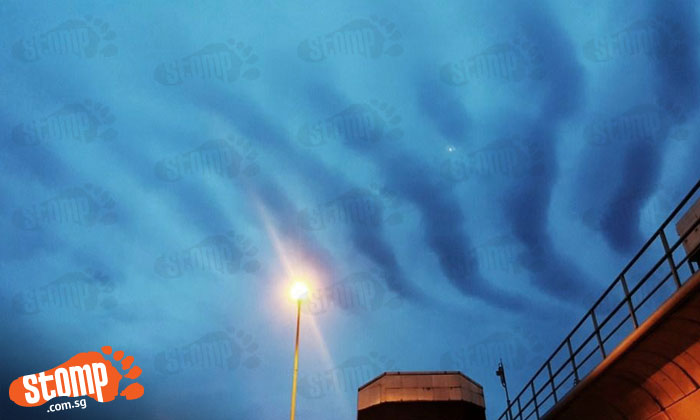 Water ripples are a common sight, but cloud ripples -- they are definitely not common.

Stomper Kannan saw some strange looking cloud formations in the sky on Monday (Nov 14) from Woodlands MRT station at around 7pm that evening.

"I believe these are known as ripple clouds which are known to be formed from cirrus or stratus clouds.

"The cloud pattern are sometimes referred to as “gravity waves” and it is said to be influenced by gravitational forces that causes the ripple effect.

"Not sure if today's Supermoon rising around the same time has got anything to do with these clouds, but I have never seen something like that before in the evening sky!

"Though the much anticipated Supermoon was not visible in Singapore, the sighting of these clouds was unexpected and was another celestical wonder in the sky.

According to Kannan, the ripple clouds ripple clouds are commonly known to occur during chillier months, and is a sign of more rainier days approaching.

"But the stripes really look strange as the patterns are uniformly repeated and was visible till the skies turned completely dark.

"The gloomy weather made this sight of the clouds possible.

Did anyone else at Woodlands or in the North area spot this strangely beautiful phenomenon on Monday evening?

Check out the beautiful photos submitted to us by Kannan in the gallery!

Related Stories
"I've seen much darker clouds and better rainbows than you already have": Stomper
Have you ever seen incredible dark clouds like these in Singapore?
No need for photoshop or filters: Stomper takes amazing photo of perfect 'division' in sky at South Buona Vista Rd
cloud
beautiful
amazing
cool
nature
sky
supermoon
moon