Stomper spits out 'snail' while having laksa at Potong Pasir coffeeshop 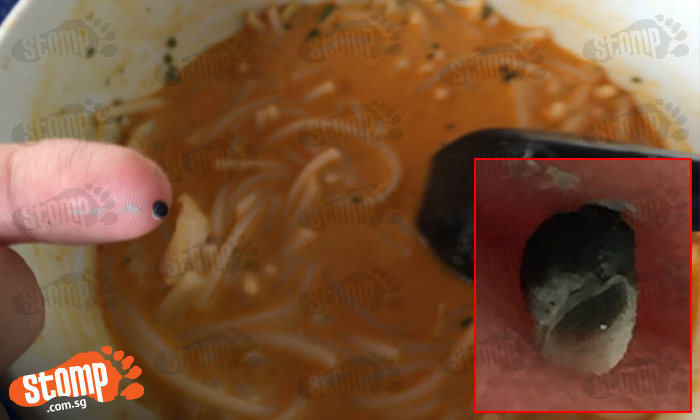 Stomper Lau Lup found what appeared to be a snail in his laksa while eating lunch at a Potong Pasir coffeeshop yesterday (Aug 14).

As the unusual discovery did not spoil the taste of his food, he decided to go ahead and finish his entire meal.

"I was eating lunch in a coffeeshop at Potong Pasir on 14 August, Sunday. As usual I ordered my favourite food, laksa with hum.

"I was savouring the food when I chewed on what initially felt like sand. I spat it out.

"I picked the weird stuff with my fingers and noticed some greyish clay-like substance staining my fingertips.

"I examined the stuff closely then to my amazement and slight disgust, there was a snail within the greyish substance.

"The snail shell was small almost like a grain of sand. However I could still distinctly noticed the seemingly dead snail with its largely intact spiral shell.

"I was famished. Since the snail did not spoil the taste of my laksa, I ate the entire food, gravy and all! I hope that I don't get diarrhoea.

"I would also like to urge future laksa eaters that although sand particles may be a common occurrence in see ham (cockles), it would be worth taking a closer look at the offending sand like particles.

"Who knows one may spit out a pearl or even another snail that the cockle may have eaten for its last meal before being served in one's bowel of laksa."